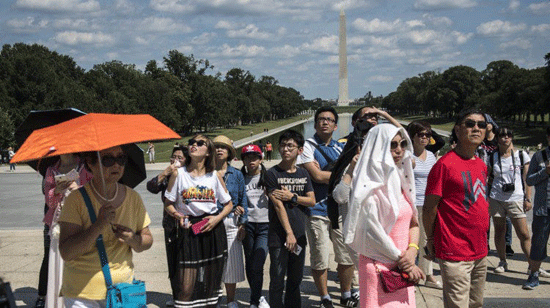 Separate report cites 5 per cent decrease in Chinese tourists to the US this year, with August showing 8.4 per cent fall in a downturn mirroring trade tensions

set to fall in next week’s National Day holidays, with flight bookings down and analysts saying numbers for the year are slowing as political tensions accelerate.

There has been a dramatic 42 per cent decrease in flight bookings from China to the US in next week’s holidays – known as “golden week” – compared with last year’s holiday week, according to travel fare search engine Skyscanner. Last year’s holiday period was one day longer.

The first three quarters of 2018 have seen a 16.7 per cent drop in flight bookings from China to the US, its figures show.

It comes as the American tourism industry watches with bated breath for signs of an impact on Chinese tourists visiting the country from the escalating US-China trade war, and on the back of travel advice issued by the Chinese embassy in the summer warning of the dangers of travel in the US.

Chinese visitors to the US are a small group overall, but their spending power is outsized, ringing up US$34.8 billion in 2016 in retail, accommodation, travel and educational spending, according to US government data.

“There’s a lot on the line here, for retailers and beyond – travel has a tremendous downstream impact, from retail and restaurants to real estate,” a US Travel Association spokesman told the South China Morning Post.

The fall in Chinese bookings is echoed by a report last month by ForwardKeys, a European travel research agency, which found that decreases in flight bookings from China to the US appear to mirror the heightening trade tensions since April.

The number of tourists from China to the US so far this year has fallen almost 5 per cent on last year, it found. Weekly bookings rose in February and March, but started to decline in April when US President Donald Trump called on officials to draw up a list of tariffs on US$100 billion worth of imports from China.

In April to August, it found, the tourism decline deepened, with August’s flight bookings down 8.4 per cent on 2017, which came after an escalation in the value of tariffs in July.

“It looks like a trend,” said ForwardKeys spokesman David Tarsh, who predicts harm to the US economy caused by a downturn in Chinese tourism could reach half a billion dollars.

“The US runs a US$28 billion travel and tourism trade surplus with China,” said Jonathan Grella, spokesman at the US Travel Association, a Washington-based non-profit representing and advocating for the travel industry.

“The source of our concern is that these trade tensions could end up upsetting an economic dynamic that is really working for America right now,” Grella said, adding that the US$28 billion was calculated by the travel association using consumer spending data.

The body currently predicts 2018 growth from last year will be 5 per cent. “We don’t have real-time data and usually the impact wouldn’t be seen until a while after it happens,” Grella said. “A change in our relationship and a trade war wouldn’t be immediately quantifiable.”

There was concern, he said, this summer after the Chinese embassy in Washington issued new security advice this summer for travellers to the US.

Coming a week before the Trump administration released a list on July 10 of US$200 billion worth of goods proposed for tariffs, it warned Chinese nationals about a litany of issues including searches from customs agents, gun violence, high costs of health, and robberies.

But their lavish spending is important for the US retail industry, according to Craig Shearman, spokesman at the National Retail Federation, based in Washington.

The number of tourists from China to the US has grown more than 800 per cent in the past decade, according to the US Travel Association, driven up by factors such as joint 10-year visas that Chinese and Americans can hold for each others’ countries.

Not everyone in the industry is predicting a downturn. Looking at data until the end of the first quarter, before tariffs escalated, Yihe Huang, of market research agency Mintel in Shanghai, expected tourism from China to the US would at least maintain 2017’s level, despite a stronger US currency and trade tensions.

However, the US is not a major growth market for China’s tourists, said Huang.

“Chinese travellers are increasingly sophisticated and are willing to try more exotic, distant and less-known destinations,” Huang said, citing double-digit growth in places outside the classic hotspots like Thailand, Japan and the US. “Visiting the US is not a main driver for the outbound travel market in China.”