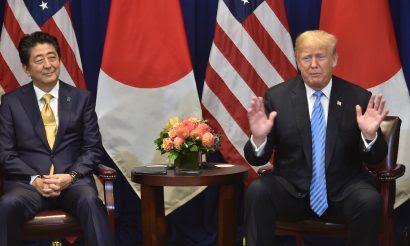 Tokyo has made clear it favors the multilateral TPP format, but has little choice but to agree to bilateral FTA negotiations

Not in so many words, of course. But reading between the lines of what the “Art the Deal” president was seeking from this week’s US-Japan trade talks in New York, Abe’s expected role is written in bold font: force Japan’s 127 million people to make Detroit great again by hoarding US automobiles.

It’s not going to happen. For one thing, Trump would’ve had better odds staying in the multilateral Trans-Pacific Partnership that he pulled America out of in one of his first acts in office. The TPP lowers some tariffs on Japan’s super-protected agriculture sector and on Toyota City, too.

Abe and Trump: Best of frenemies

A bilateralist at heart, Trump now expects Abe to bow to Washington’s needs. A fair assumption? Perhaps, considering how compliantly Abe has stood by Trump, like some Republican senator who happens to live 7,000 miles away.

But Abe has leverage, not to mention a few chips earned doing Trump’s bidding on China, North Korea and other hot-button issues. Tokyo, for example, is staying in the TPP, along with 10 other economies. And Abe could always pivot to China instead.

This latter choice will weigh on Abe’s mind as trade-deal negotiations begin. Japanese automakers are already eyeing China, where prospects are better for market-share and electric vehicles. American car sales, meantime, have plateaued, with many millenials preferring public transportation and bike sharing.

Nor are Ford and General Motors clamoring for Japan. In 2016, in fact, Ford mulled giving up on the Land of Rising Sun. Consumers in Japan care less about “Made in Japan” than quality, in which Toyota, Nissan and Honda excel. So, BMWs and Volkswagens? For sure. Fords? Not so much.

Americans also have turned en masse to gas-guzzling SUVs rather than to the compact cars and hybrid vehicles on which Japan Inc is focusing.

Nevertheless, Trump is hungry for a quick win. As scandals and investigations swirl and next month’s Congressional elections loom, Trump is lashing out abroad. His tariffs on $250 billion of China goods, and counting, are part of his looking-strong-for-the-base schtick.

The same applies with Trump forcing South Korea to reopen a trade deal that had been in effect since 2012.

Japan is next. Trump is pointing the economic equivalent of a gun at Abe. With car and auto-part imports targeted by Trump for a potential 25% tax, Abe and Moon are compelled to play ball. Both Seoul and Tokyo rely on Washington for security in a dangerous neighborhood – and Trump knows it.

On Monday, Trump and Moon signed a revision to their free trade pact. It appears to have been renegotiated without too many alterations or tears. Most notably, it opens Korea’s economy up to more US autos – autos that, let’s face it, Korean households probably won’t clamor to buy anyway.

Given how few notable changes Trump won, it’s clear this was an exercise in saving face. Still, Trump can claim a bilateral trade win en route to bigger targets.

Might seeing South Korea get modestly deeper access to Trump’s America up the pressure on Abe – given that Korea Inc and Japan Inc compete in the same sectors? Perhaps.

But Moon’s signature on Monday was more about placating Trump than creating new Korean jobs. Moon needs Trump’s help to bring peace to the Korean Peninsula.

Abe feels a similar compunction. From the jump, his administration has lived in fear of becoming Twitter fodder for Trump. Hence Abe’s sprint to Trump Tower nine days after Trump’s shock win in November 2016. But Abe has great incentives to act glacially in negotiations.

Trump’s zero-sum worldview means this is really a shakedown. With a worldview stuck in the 1980s, when Japan was the equivalent of China today, Trump is determined to retrieve millions of jobs he believes Japan stole.

Never mind that Toyota, Nissan and Honda make millions of cars in Tennessee, Alabama and other US states. Or that Harley-Davidson, as proudly American a name as you’ll find, is moving jobs abroad.

Abe would be wise to redouble efforts to pull Trump back into TPP, citing its potential to rein in China. But realistically, he will have to bite the bullet on the bilateral trade pact that Trump wants – lest Trump retaliate against the yen or threaten to pull troops from Okinawa. And in the end, Japan might very well end up acquiescing to the Trump Show.

For Abe, the goal will be not giving away too much. A big win would be getting Trump to scrap the 25% tax on light truck imports and 2.5% levies on cars. But with an imperative to add to America’s take, not subtract, that seems unlikely.

For Trump, it would be getting Japan to open up its notoriously closed agricultural market – also wildly unlikely given the tight hold farmers have on Abe’s Liberal Democratic Party.

One point of agreement: both sides want to fight “non-market-oriented policies and practices by third countries.” In other words – China.

That is why Abe’s gold standard would be getting Trump back on the TPP train – the word in some circles is, Trump regrets leaving it. Or just wait out the clock. Tokyo, after all, went through this bilateral game with former Presidents Ronald Reagan, George HW Bush, Bill Clinton, George W Bush and Barack Obama and managed to remain relatively inviolate.

Granted, Trump has been more acerbic – and is wielding far more, and bigger, sticks than carrots. But Abe and the LDP play the long game. It knows the Trump Show will end at some point, when the US will likely return to free-trade form.

Why give away the Japan Inc store in the meantime?

‘How About Sending One?’ Netizens Troll Pakistan for Recalling the French Envoy ‘That Doesn’t Exist’