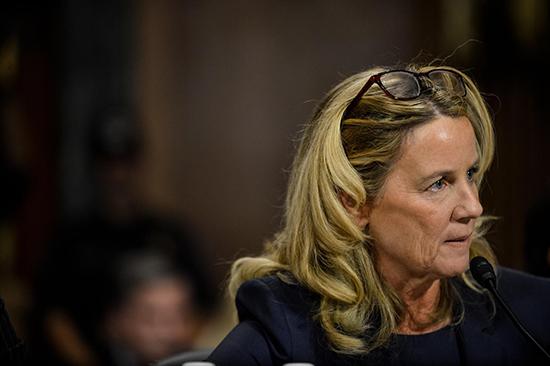 WASHINGTON — She was terrified. She did not want to be there. She was badly in need of caffeine.

When Christine Blasey Ford, a 51-year-old California university professor, entered a hearing room on Capitol Hill on Thursday morning — returning to a city she fled decades ago to publicly relive the sexual assault that first prompted her to leave — she was not sure she would make it through her opening statement.

But Dr. Blasey, surrounded by her lawyers, publicists and a sisterhood of friends who had convened to support her and zealously protect her privacy, said her piece. She delivered a harrowing tale of casual teenage violence that put a human face on an allegation that has threatened a Supreme Court nomination and captured the attention of the nation in the throes of a profound reckoning with the realities of sexual assault.

Visibly anxious but firm in her recollections, traumatized but graphic in her description of what she called a life-altering trauma, Dr. Blasey testified over three hours of questioning about the night in the Washington suburbs 36 years ago when she said an incoherently drunk Brett M. Kavanaugh, President Trump’s Supreme Court nominee, pinned her down on a bed and ground his body against hers, trying to remove her clothing as he clamped a hand over her mouth to stifle her screams while a friend watched.

“Indelible in the hippocampus is the laughter — the uproarious laughter — between the two, and their having fun at my expense,” said Dr. Blasey, a research psychologist, using the clinical language of neuroscience to describe a horrifying recollection of Judge Kavanaugh and the friend, in essence acting as both victim and expert witness in her own story.

“I’ve had to relive this trauma in front of the world,” she said later.

Dr. Blasey, who is fearful of flying, made the journey to Washington without her husband, Russell Ford, who stayed behind in California to tend to their children amid security threats that have dogged her and her family since she went public with her allegation against Judge Kavanaugh nearly two weeks ago. But she was accompanied by a phalanx of friends — many of them high school classmates from the all-girls Holton-Arms School — who have rallied to her side with offers of logistical help, public-relations advice, and even meditation and breathing techniques to calm her.

“I anticipate needing some caffeine,” Dr. Blasey told the Senate Judiciary Committee moments after she took her seat at a wooden witness table facing an array of senators and several ultrabright lights. She would go through two cups of coffee and a bottle of Coke before her turn in the national spotlight was over.

When she was not fielding questions, Dr. Blasey — who was guarded by at least two large plainclothes officers as she made her way around Capitol Hill — retired to a small room reserved for her, to calm herself with breathing exercises and confer with her legal team. While her friends gathered in the hearing room on Thursday morning, Dr. Blasey huddled in the holding room with her lawyers before delivering her statement.

Republicans had initially put Donald F. McGahn II, the White House counsel who has spearheaded Judge Kavanaugh’s nomination, in a room across the hall from Dr. Blasey’s, but he was moved before she arrived after a Senate aide realized the awkward placement and asked that Mr. McGahn go elsewhere.

“She needed some time to herself to center, and she had some last-minute conversations with her attorneys to go through her opening statement and just feel like she could get through it without losing her center,” said Samantha Guerry, a former Holton-Arms classmate who was a guest of Dr. Blasey’s at the hearing, and took on the unofficial task of handling the news media for the school’s other alumnae who were part of the group. “The hardest part was getting through that opening statement where she had to relate that experience again in this format. It was intense.”

Until Thursday, Dr. Blasey had mostly remained an enigma, known to the public only by a single blurry photograph that showed her on the beach wearing sunglasses that obscured much of her face. When she arrived at the Dirksen Senate Office Building in the flesh, bespectacled in a blue dress and matching jacket, she was mostly recognizable by her shoulder-length blond hair.

In a roomful of senators locked in a highly charged political battle over the nation’s highest court, Dr. Blasey was strikingly out of place, clearly unschooled in the art of testifying before Congress or being questioned by a prosecutor. She said she had initially not understood why she would need a lawyer to relay her allegation against Judge Kavanaugh, and eventually sat in her car in a Walgreen’s parking lot in Rehoboth Beach, Del., interviewing lawyers she could never have imagined needing.

She often perched her glasses on top of her head as she marked up documents carefully with a pencil, a professor bending to a task she had always dreaded. And when she spoke, she sometimes leaned on her training as a scientist, often resorting to the technical language and concepts of brain function and memory.

Asked how she could be certain in her recollection of what happened with Judge Kavanaugh, she told the prosecutor, Rachel Mitchell: “Just basic memory functions, and also just the level of norepinephrine and the epinephrine in the brain that, you know, encodes that neurotransmitter that codes memories into the hippocampus and so the trauma-related experience is locked there, whereas other details kind of drift.”

During the attempted rape, Dr. Blasey said, she had a typical “fight or flight” reaction.

“I was definitely experiencing the surge of cortisol and adrenaline and epinephrine,” she said.

Senate Republicans, mindful of the optics of a row of white men questioning a sexual assault survivor in a high-stakes hearing, left their questioning to Ms. Mitchell, a matter-of-fact sex crimes prosecutor from Arizona, rarely addressing Dr. Blasey themselves.

Ms. Mitchell’s trial-like line of inquiry drew steady but sometimes befuddled responses from Dr. Blasey, particularly as Ms. Mitchell tried to determine whether Democrats or outside interest groups had selected her legal team or paid the expenses for her representation and polygraph test.

Dr. Blasey said that aides to Senator Dianne Feinstein of California, her home state senator and the ranking Democrat on the panel, had recommended she retain Debra Katz, one of her lawyers, but when Ms. Mitchell pressed on the matter of legal expenses, Michael Bromwich, another of Dr. Blasey’s lawyers, jumped in. “We are not being paid, and we have no expectation of being paid,” he said.

Democrats peppered their questioning of Dr. Blasey with expressions of support and gratitude, calling her decision to come forward selfless and heroic.

“I believe you,” said Senator Richard Blumenthal, Democrat of Connecticut. “You have given America an amazing teaching moment.”

Senator Charles E. Grassley, Republican of Iowa and the chairman of the panel, took pains to show sympathy to Dr. Blasey, telling her as he opened the session that she could have a break anytime, and agreeing to a request from Mr. Bromwich that she be allowed to leave as soon as her questioning had ended.

Dr. Blasey did not stay to hear Judge Kavanaugh give an angry, impassioned, aggrieved defense of himself, and her advisers said she had not listened to his sometimes tearful testimony. She departed the Dirksen building as she had come Thursday morning: shrouded in secrecy and shielded from public view by her lawyers, who refused to give even the slightest detail about her time in Washington.

After she left Capitol Hill, Dr. Blasey spent the afternoon visiting with family and friends — some from childhood days, some from her clique of surfing buddies from Palo Alto, Calif.

“We are just telling her that she did it and she’s like an unwitting hero,” said Cheryl Amitay, another friend from Holton-Arms who was heading to the gathering. “She didn’t expect this, but she’s embraced it without losing who she is.”

“She wasn’t trying to impress anybody today,” Ms. Amitay added, “and that’s what ended up being so impressive.”

A version of this article appears in print on Sept. 28, 2018, on Page A15 of the New York edition with the headline: Fueled by Determination, and Caffeine, a Woman Relives a Teenage Trauma. Order Reprints | Today’s Paper | Subscribe