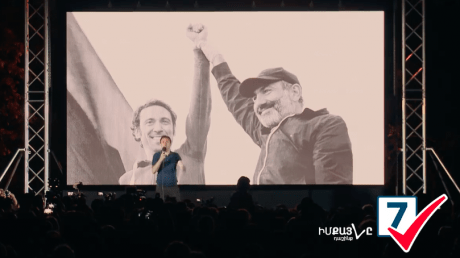 This week’s elections to Yerevan city council have been markedly fairer than previous years — but that doesn’t mean there isn’t intrigue.

Hayk Marutyan, the new mayor of Yerevan, on the campaign trail. Source: Facebook. In order to understand election-related processes in Armenia, it is important to put several pins on the political map.

First, we have witnessed tough policy from Armenia’s revolutionary government — mass anti-corruption cases, shocking revelations of fraud, criminal cases against former officials and cleanup of state personnel. Second, the “1 March Case”, the arrest and further release of Armenia’s second president Robert Kocharyan, his comeback to politics as the main opponent of Prime Minister Nikol Pashinyan. And amidst all of this, extraordinary municipal elections in Yerevan, which transformed into a referendum of trust toward the new government.

Between dark and light

On Sunday, Yerevan residents cast their votes and elected a new Council of Elders. Four political alliances and eight parties ran to be included in this body — with My Step (the revolutionary alliance lead by Nikol Pashinyan’s Civil Contract Party), Luys Alliance and Prosperous Armenia (PAP) under the spotlight.

From the beginning of the campaign, the party programmes did not receive much attention — some parties didn’t even have a programme and many had similarities. Discussions on whether the programmes were realistic, or what mechanisms could be used to implement them, remained on the margins of public debate. In effect, they were merely a formality. Generally, all programmes reflected the logic of “we are for everything good and against everything bad”.

But a national-level political intrigue was soon to dominate the campaign. A week before the campaign kicked off, Hayk Marutyan, a comedy actor and number one in the candidate list for My Step, declared: “The situation in Armenia is quite clear — there are white forces and there are black forces, that’s it.” Marutyan’s division of the political scene into “the whites” and “the blacks” was widely criticised, Marutyan and his teammates had to give clarifications. Prime Minister Nikol Pashinyan also expressed his concern, saying that “maybe Marutyan accepted that some statements were not correct… Every political announcement should fit into the logic of the revolution of love and solidarity. We should talk about brighter colours than black and white.”

The next day after the campaign kicked off, Armenian media reported a leaked recording of phone conversation between the Chief of National Security Service, Artur Vanetsyan, and the Chief of Special Investigation Service, Sasun Khachatryan. This leak played a key role in further developments. And the figure of Robert Kocharyan, Armenia’s second president, loomed behind this leak.

During a meeting with voters after the conversation was posted, Pashinyan gave an emotional speech. Addressing the wiretapping, he lashed out at those behind the “counter revolution” and reinforced Marutyan’s rhetoric of “light” and “dark” forces, with the My Step alliance representing the revolution and the rest representing counter revolution. As a result, elections to Yerevan city administration turned into a referendum of trust in Armenia’s revolution.

It was here that Prosperous Armenia, lead by oligarch Gagik Tsarukyan and widely known for their record of affection towards the former authorities, stepped forward and tried to catch the wave of new developments.

First, Prosperous Armenia accused My Step of starting an “information terror” and denied any connection with Robert Kocharyan. They also claimed that My Step is doing Kocharyan’s “political PR” more than Kocharyan himself. Naira Zohrabyan, the lead Prosperous Armenia candidate, went on to challenge Hayk Marutyan to debate her publicly (“If you are a real man come to debates without Nikol [Pashinyan]”), emphasising that political rivalry should revolve around the political programmes. PAP itself has never held a convincing discussion on its programme or its implementation.

Second, PAP, which has been loyal towards Pashinyan’s government since the events of April and May 2018, had to visibly position themselves as opposition. But still PAP didn’t manage to get rid of their image as a sideshow party of the former Republican Party authorities.

Luys Alliance, with Armenia’s Minister of Justice Artak Zeynalyan topping its list, showed a reserved attitude. Being a part of the Yelq Block, which also included Pashinyan’s Civil Contract, Luys Alliance presented themselves as part of the revolution, criticising the division between “light” and “dark” forces as an unfriendly act towards them.

During the campaign it was obvious that these three political actors had the best chances of being elected to the Council of Elders.

Organising clean and fair elections was the promise that the new government talked about the most. Moreover, the municipal elections in Yerevan were seen as a testing ground for the upcoming parliamentary elections. Both sides of the “barricades” seemed to agree that the upcoming elections should be the first — in a long time — which would raise no procedural concerns.

Two of the main promises of the revolutionary government — to change Armenia’s Electoral Code and legislation on political parties — have had to be postponed indefinitely due to a lack of time and possible sabotage by the Republican Party majority in parliament. A new expert committee working on electoral reforms was established. Besides, some crucial amendments were made to the Criminal Code, making the punishment for electoral offences stricter. The main restraining factor preventing possible electoral fraud turned out to be the “new” police, which has been under the aegis of the revolutionary government and had political will and resources for the suppression of offenses.

Allegedly, there were reports that PAP started using its resources for vote buying and intimidation from the very beginning of the campaign. A day before the elections, “Independent Observer Public Alliance”, which deploys hundreds of people to work as observers for local elections, stated at a press conference that there were enough trustworthy sources to claim that PAP issued bribes to people to attend Naira Zohrabyan’s meetings. An MP from PAP and supporters tried to stop the press conference.

The same day, police raided the campaign offices of PAP, which seemed to confirm the circulating information. Police found enough proof of fraud, and as a result criminal cases were opened. It served as a preventive signal to PAP that they could not repeat the same electoral behaviour which worked impeccably during all past elections.

Predictably, the elections went ahead without any major violations. All eight local observer organisations confirmed this, mentioning the day was very calm and somewhat “boring”. Previously, election observers had to face the abuse of “administrative resources” — local electoral committees, proxies, police and district gangs. For the first time in many years, observers didn’t have to physically stop frauds, but did what they were supposed to do — observe, register and evaluate.

The turnout of 43% was the only thing that allowed the former ruling Republican Party to speculate about the elections. In fact, this turnout was higher than previous elections, when the numbers were falsified through abuse of administrative resources, vote buying and bringing people to polling stations by hundreds, when many who did not live in Armenia any more were still included in the voting lists and when even the dead voted too.

At first sight, the alarming polarity of the seresults testifies to the fact that the course and results of these elections can not be considered outside the general context of the revolution.

Of course, people didn’t cast their votes solely for Hayk Marutyan: their choice wasn’t guided by political programmes; conceptual differences over Yerevan’s issues were secondary. People went to elections to reaffirm their support for the revolutionary government, to ensure the revolution is continuous and enters all state institutions, to defend the revolution from the peril looming in the distance. Clearly, the revolution in Armenia is not finished and is entering new spaces, gradually overcoming rising barriers. It is hard to imagine political processes outside of the revolution any time soon.