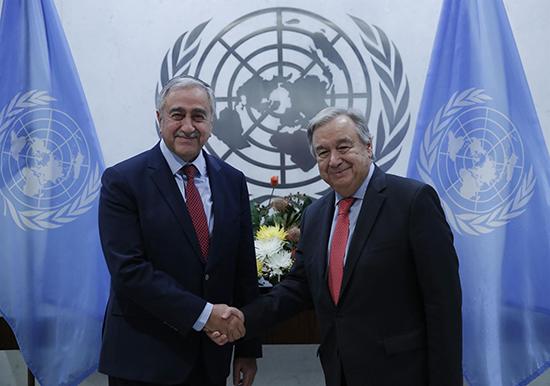 It is necessary to aim a result-oriented, scheduled and strategic package deal for the Cyprusnegotiation process, the president of Turkish Republic of Northern Cyprus (TRNC) told reporters following his meeting with the UN Secretary-General Antonio Guterres at UN headquarters in New York.

“Therefore, it is clear that the Greek Cypriots, who insists on open-ended negotiation, insists on the non-solution,” Akıncı added.

The TRNC president met with Guterres with whom he exchanged views on the prospects for renewed Cyprus talks.

A statement issued by the UN after the meeting said: “The Secretary-General and Mr. Akıncı exchanged views regarding the prospects for renewed talks on the Cyprus issue since the closure of the Conference on Cyprus in July 2017.”

Guterres will decide on the way forward in the Cyprus talks after he has met with all the involved parties and received the report of his envoy Jane Holl Lute.

Akıncı said Lute’s report was not ready yet, but the report would be delivered to him in the coming days and that he would re-engage with the parties in the light of the report.

He said the report was going to be submitted to Guterres in one or two weeks and to the UN Security Council on Oct. 15.

He added that the report was going to be discussed on Oct. 30.

Akıncı said he shared their views about the process with Guterres and reminded him that it was the 50th year of the negotiations during their meeting on Sept. 28 evening.

He also added that it was not possible to go out of the framework of the UN, as the issue was being discussed at the UN and with its Secretary-General.

“If there is going to be a solution, it’ll be in this framework,” he added.

Recalling 2004 and 2017 attempts for a solution on Cyprus, Akıncı said Guterres witnessed all the positive contributions from Turkish Cypriots to those processes.

Akıncı also said that the Turkish Cypriots boldly took steps to ensure a solution in all processes, but they remained unrequited.

In 2004, negotiations over Cyprus resumed after a UN-backed Annan Plan to reunify the Turkish Cypriot and Greek Cypriot communities.

The reunification talks — brokered by UN Special Cyprus Envoy Espen Barth Eide — were launched in May 2015 to discuss a permanent settlement for the divided Mediterranean island.

The status of the island remains unresolved in spite of a series of discussions that resumed in May 2015.

There has been an on-and-off peace process over recent years, the latest failed initiative having taken place in Crans-Montana, Switzerland in July under the auspices of guarantor countries Turkey, Greece and the U.K., collapsing last year.