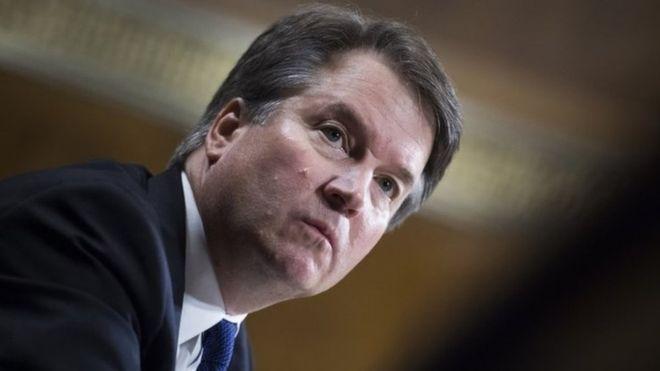 The Trump administration has denied restricting an FBI inquiry into sexual misconduct allegations made against Supreme Court nominee Brett Kavanaugh.

Democrats have been alarmed at reports in US media the White House was limiting who could be interviewed under the investigation.

President Trump ordered the inquiry on Friday at the request of a Senate committee.

Mr Kavanaugh denies the allegations against him.

The new inquiry has delayed a final vote on Judge Kavanaugh, who if confirmed is likely to tip America’s highest court in favour of conservatives.

Several US media outlets over the weekend said that the scope of the investigation was being constrained by the White House, reporting that one of Mr Kavanaugh’s accusers, Julie Swetnick, would not be interviewed.

Mr Trump has denied imposing any restrictions, saying he wanted the FBI “to interview whoever they deem appropriate” in its check on his pick for the Supreme Court.

Wow! Just starting to hear the Democrats, who are only thinking Obstruct and Delay, are starting to put out the word that the “time” and “scope” of FBI looking into Judge Kavanaugh and witnesses is not enough. Hello! For them, it will never be enough – stay tuned and watch!

Some of his other top officials also hit back, with his spokeswoman Sarah Sanders saying the White House was not “micromanaging” the inquiry.

“It’s a Senate process. It has been from the beginning, and we’re letting the Senate continue to dictate what the terms look like.”

Despite this, NBC news quoted a White House official as saying restrictions remained in place, adding that as the FBI is carrying out a background – not a criminal – investigation, the White House decides the parameters of the probe.

The most senior Democrat on the Senate’s Judiciary Committee, Dianne Feinstein, has sent a letter urging the White House to release the written directive sent by President Trump to the FBI launching the investigation.

What will the FBI investigation do?

Although the Senate Judiciary Committee on Friday approved Judge Kavanaugh’s nomination, it was conditional on a new inquiry into what it said were the “credible allegations” facing him.

President Trump then ordered a “supplemental investigation”, to be completed in a week.

The inquiry involves the FBI reopening its previously completed background check on Judge Kavanaugh. This may mean going back to old witnesses – or speaking to new ones.

As the investigation is not a criminal one, the FBI will not say whether they believe the allegations are true.

Who are Mr Kavanaugh’s accusers?

The first woman to come forward with allegations against Mr Kavanaugh was psychology professor Christine Blasey Ford. She testified at a hearing last week that he tried to remove her clothing, pinned her to a bed and covered her mouth at a house party in 1982, when she was 15 and he was 17.

In response to her testimony, Mr Kavanaugh said he had never assaulted her or anyone else. He accused Democrats of politicising the process and harming his family and good name.

Two other women have also come forward: Deborah Ramirez, who attended Yale at the same time as Mr Kavanaugh, says he exposed his genitals to her during a college drinking game.

Julia Swetnick says she went to house parties attended by Mr Kavanaugh in the early 1980s, where she said he and his friends tried to “spike” girls’ drinks. He has denied both accusations.