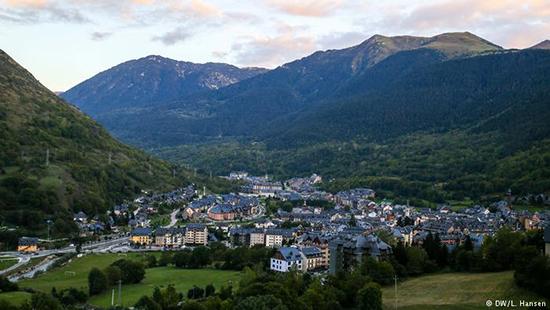 Spain’s Val d’Aran has a strong regional identity. The people who live in this out-of-the-way valley aren’t fond of Barcelona’s independence movement. And if push comes to shove, they may opt to leave Catalonia.

Nearly a year after the 2017 Catalan independence referendum on October 1, many were still dreaming of full regional autonomy.

But some 200 kilometers (120 miles) north of Catalan capital as the crow flies in Val d’Aran, on the border with France, September 11 was a day like any other.

“We have nothing to do with all that hubbub,” said Juan Amiell, a valley local, a few weeks after Barcelona’s national day rally. Leaning on his cane, he grinned and added: “We’re not Catalans.”

Some 10,000 people live in Val d’Aran, surrounded by the verdant Pyrenees Mountains. The region’s largest village is Viella with its 5,000 inhabitants; the smallest is Bausen, with a population of just 40. This is where Amiell lives, up a 4-kilometer (2.5-mile) serpentine mountain road a stone’s throw from the French border.

“We are Aranese people,” Amiell explained. The 88-year-old has lived all his life in the mountain village. In the exact same house, in fact. He can see the entire valley from his kitchen window, and knows it like the back of his hand.
Here, he said, most people speak the Aranese language, which has little in common with Catalan. Although Aranese is one of Catalonia’s official languages, it’s only spoken in Val d’Aran. It’s related to Occitan, a language spoken in southern France.

Val d’Aran, which shares its northern border with France, was largely isolated from Spain until 1948. Amiell recalled that most people would spend their entire lives in the valley. “Occasionally we would travel, but the only streets out of the valley led to Toulouse,” in France.

“The Aranese language is the most important element of our local identity,” said the mayor of Viella, Juan Antonio Serrano. “And because we were cut off from the rest of Catalonia for such a long time, we do not feel very connected to them.” His position on last year’s Catalan independence referendum is clear: “If Catalonia decides to split off from Spain, we’ll decide to split off from Catalonia.”

A law passed in 2015 allows the region to vote on whether it wants to leave Catalonia and become part of Spain. With Catalonia’s independence referendum looming last October 1, plans were drawn up in Val d’Aran for such a vote. “But the referendum was never held,” Serrano said.

Leaving Spain would destroy the economy in the region, which is known throughout Europe for the Baqueira-Beret ski resort. It’s Spain’s largest, and said to be a favorite of the Spanish royal family. During the winter, about 60,000 vacationers glide down the resort’s 153 kilometers of trails every hour; the streets of the surrounding towns and villages are lined with hotels and restaurants.

“Our economy largely depends on tourism and gastronomy,” Serrano explained. “The income generated in winter gets us though the whole year.” If Catalonia — and with it the Val d’Aran — were to split off from Spain, and possibly leave the European Union, that could seriously harm the tourist trade. Serrano doesn’t even want to think about what that could mean for his region.

In the warmer months, Juan Estevez works as a farmer. But in winter, the 64-year-old, like many others, earns extra money as a ski instructor. He is well aware of the economic consequences of Catalan independence. But for him, what matters most is his local identity.

“This is not Catalonia, this is the Val d’Aran,” he said — even though there are few Aranese flags on display, never mind Catalan flags. Only at the town hall in Viella does the Aranese flag fly, side-by-side, with the banners of Spain and Catalonia. “Without switching on the TV, we would hardly even be aware of what is going on in Barcelona,” joked Estevez.

Estevez lives in Vilac, a district of Viella. There are only a handful of residences here, one of them his farm. It’s a quiet area — disturbed only by the hourly church bell and the occasional tractor mowing the grass. Estevez likes it that way. “We don’t want trouble,” he said. “I would prefer that everything stay just as it is.” That way, he said, they wouldn’t have to break ties with either Catalonia or with Spain.

In August, many tourists stream into the Val d’Aran to go hiking, said Juan Amiell. But once they are gone, things quiet down considerably until winter. Amiell stopped to chat with a neighbor — in the small village of Bausen, everyone knows everybody. His neighbor, too, wants everything to stay just as it is: “Things are just fine, we are not bothering anyone, and nobody is bothering us.” That, he said, is what Aranese people are like.

But if Catalonia wins its independence from Spain, he doesn’t want the valley to follow suit. The Spanish government brought many great things to their valley, he said, and built a tunnel to Viella, for instance. He thinks Catalonia’s regional government pays little attention to Val d’Aran. So for him the matter is clear. “First and foremost, I am Aranese. Only then do I consider myself Spanish, and lastly Catalan,” he said, speaking in Aranese.

Mayor Serrano expects a second Catalan independence vote could happen again soon. “It’s just a matter of time,” he said. “Pressure is mounting in Barcelona.” Then it will be up to the people of Val d’Aran to choose their side: Catalonia or Spain. “But we’re ready to vote,” he said.

US driven by geopolitical opportunism in the Maldives