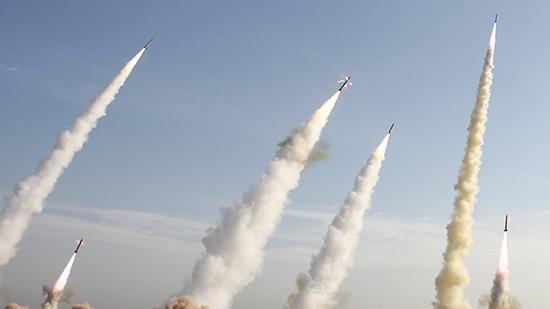 The Iranian Islamic Revolutionary Guard Corps (IRGC) says it has hit the ringleaders responsible for a terrorist attack on a military parade in Ahvaz on September 22, which killed 30 people and injured over 60.

In a statement published by its own outlet Sepah, the IRGC said its Aerospace Division targeted the “headquarters of the terrorists” east of the Euphrates in Syria. The statement was accompanied by photos of surface-to-surface missiles being launched. It claims that “a large number” of the terrorists were hit.

Before the IRGC announced the attack, videos were posted on social media purporting to show the moment of the launch. Some users said there were a total of eight missiles fired, and that two of them crashed shortly after being fired.

Last month’s attack on the military parade in the southwestern Iranian city of Ahvaz killed 30 people and injured around 70. Tehran is accusing the US and its allies in the Gulf of enabling the carnage.

UPDATE
Iran’s Islamic Revolution Guards Corps (#IRGC) strikes the gatherings of the ringleaders of the recent terror attack in the southern Iranian city of #Ahvaz, in the east of the Euphrates with several surface-to-surface ballistic missiles. pic.twitter.com/MpuTWDnDeK

Iranian President Hassan Rouhani called the US a “sponsor” of the states that provided the terrorists with material and political support, and the IRGC vowed “a crushing and devastating” response.

Washington has denied claims that it was to blame for the tragedy, instead accusing the Iranian government of poor governance and inability to protect its citizens. Rouhani shot back by saying it was like blaming 9/11 victims.

The likely target of Iran’s Sunday attack was a pocket of IS militants holed up in the eastern part of the Euphrates River Valley.