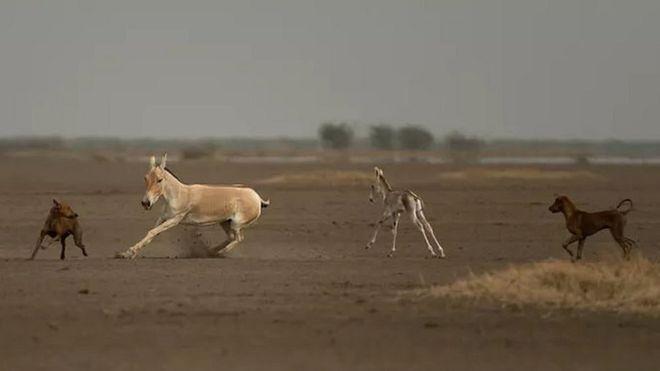 They are our animal companions, first domesticated by humans as much as 50,000 years ago. But as the global population of domestic dogs continues to grow, are humans’ canine companions posing a threat to wildlife? Science writer Dr Justyna Kulczyk-Malecka investigates.

It took Dr Julie Young the better part of a winter to stop her dog – named ZZ Bottom – from chasing the local wild turkeys.

“Squirrels are the hardest for him not to chase”, she tells me. “But I train my dog, and I just tell him ‘sit’ or ‘stay’ and he will.”

It is very much in Dr Young’s interest to make sure she has a perfectly-behaved canine. As well as loving the local hiking trails of her native Utah, she is a behavioural research ecologist with the US Department of Agriculture’s National Wildlife Research Centre.

The scientist’s journey into this subject began a decade ago in Mongolia, where she studied the calves of endangered Mongolian saiga.

“Saiga antelopes in Mongolia were already an endangered species, and what we have seen doing the field work was that feral and free-roaming dogs were sometimes harassing the saiga” she says.

“They were running away from dogs and expending more energy, which is critical – especially during the calving season – because they might get separated from their young.”

As it turned out, the research worldwide shows similar results – free-roaming dogs occasionally attacking wildlife, which can threaten the conservation of endangered species.

As the human population grows, so does the population of our companion animals, meaning dogs are roaming into territory that used to be a haven for wild animals. The numbers certainly back that up – there are now an estimated one billion domestic dogs around the world.

A 2017 study, where an international team crunched the numbers on the threat posed by dogs found that dogs are implicated in the extinction of at least 11 species, including the Hawaiian Rail and the Tonga Ground Skink.

“Dogs are also a known or potential threat to 188 threatened species worldwide,” explained the researchers in an article summarising their study. “96 mammal, 78 bird, 22 reptile and three amphibian species.

“This includes 30 critically endangered species, two of which are classed as ‘possibly extinct’.”

That finding placed dogs in the number three spot – after cats and rodents – as the world’s most damaging invasive mammalian predators.

The US Department of Agriculture recently put its own focus on cases of feral and free-roaming dogs attacking livestock – attacks which had previously been blamed on wolves and coyotes.

Dr Young says: “In California, [these] packs of feral dogs are most likely coming from illegal pot farms that may use dogs to protect the crop and at the end of the harvest season they may just release the dogs.

“These types of dogs are very aggressive, guarding dogs. They’re never tagged or collared; they don’t have any sort of ownership.”

The aggressive behaviour of these marijuana guard dogs, however, is not the only threat they pose. They can also carry and pass on lethal diseases to other animals.

Professor Claudio Sillero is chief scientist at the Born Free Foundation and a founder of the Ethiopian Wolf Project. “We were able to demonstrate that these free-ranging dogs that people keep to protect livestock are the main vector of the viral diseases that can affect both wildlife and humans,” he says.

“Vaccinating and controlling the occurrence of rabies in domestic dogs reduces the impact on wildlife, but also provides direct benefits to humans.

“Rabies is a lethal disease and can have very nasty consequences to people who are bitten by free-ranging dogs.

“And livestock is also susceptible to rabies, so there is financial cost to this in a rural community.”

Professor Sillero’s team has been able to immunise Ethiopian wolves by providing oral vaccinations in baits.

“The greatest value of this approach is that it becomes a proactive vaccination strategy,” he explains.

“It is less stressful to the animal with no risk of disturbance of the social structure.”

Away from such direct conservation measures, what can dog owners do to stop their companions posing a threat to wildlife?

Dr Young says there is a great deal that people can do.

“There does need to be more science to better quantify [dog attacks on wildlife] – to figure out why and how this is happening, and what can we do to stop it,” she says.

“I don’t think there’s one-step solution to this issue, but we could do more outreach and education.

“If people were more aware of the consequences, as if their dog starts to chase a wild animal or chase livestock or whatever that may be, they would be more aware of training and control.”

Professor Sillero agrees and adds: “It is essential for people to be more responsible in the way they keep and look after their dogs.

“Increasingly, domestic dogs are being abandoned and because they are such resilient and adaptive creatures, they can adapt to life in the wild.

“They can form packs and they have to forage for food, which often tends to be garbage and left-overs from human habitation, which attracts them to villages and cities.

“We need health policies, to try to reduce what is a serious health and security problem.”

“I just went out with my dog this morning,” she says.

“There’s never a bad dog, there are bad dog owners – dogs are human companions, so [it’s up to us] whether they turn out to be good dogs or bad dogs.”