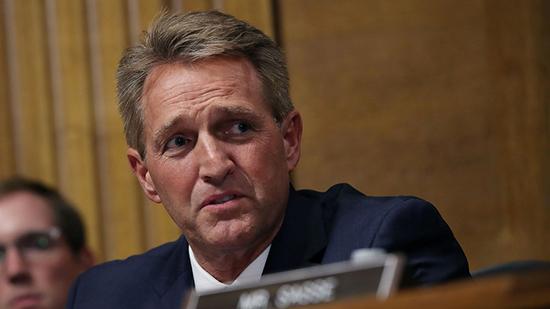 Sen. Jeff Flake (R-Arizona), the key figure behind the White House’s decision to re-open an FBI investigation into SCOTUS nominee Brett Kavanaugh, has said he would have not called for the probe if he hoped to get re-elected.

Flake has served as a senator for Arizona since 2013. In October last year, he announced that he would not be competing for the seat in the looming congressional elections in November.

In an interview to CBS’s ’60 Minutes,’ the outgoing senator admitted that he would not have risked his chances of re-election by siding with Senate Judicial Committee Democrats in calling for the FBI investigation into sexual misconduct allegations against Kavanaugh if he wanted to keep his job.

“Not a chance,” Flake admitted, adding that he would not have deviated from the party line.

The ‘elevator incident’ was the turning point that prompted him to join Democrats in their calls for the FBI probe, he said.

Midway through the Senate Judicial Committee hearing on Friday, Flake was cornered by women who said they were sexual assault survivors and pleaded with him to delay the Kavanaugh vote.

The lawmaker admitted that he was moved by the story of the woman who confronted him, saying he had a “feeling that this was history” and he made a decision on the spot.

“I don’t think anybody expected – you know, what happened on Friday to happen and I can’t say that I did either.

Flake’s confession has triggered a torrent of angry responses from conservatives on Twitter, accusing the senator of being a “coward” and a “weak person” who would choose high approval ratings over his constituents.

Following Flake’s call for an FBI probe, US President Donald Trump ordered the agency to re-open the investigation that would be limited to one week. The decision drew criticism from Democrats, accusing the White House of an attempt to micromanage the investigation by limiting its scope.

On Sunday, White House Press Secretary Sarah Sanders denied allegations that the administration has been interfering with the probe.

“We’re not micromanaging this process. It’s a Senate process. It has been from the beginning, and we’re letting the Senate continue to dictate what the terms look like,” Sanders said.

Trump also hit back against the allegations, while taking a swipe at Democrats, tweeting that “for them, it will never be enough.”