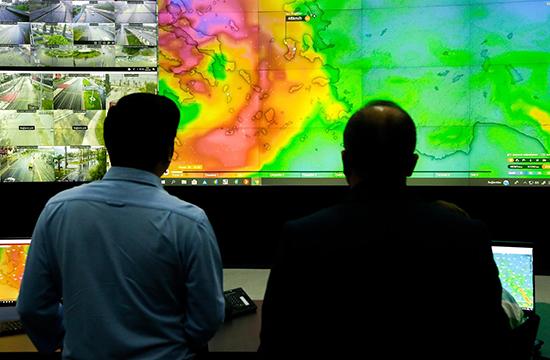 A powerful tropical storm, dubbed “Medicane,” made landfall on Greece mainland on Sept. 29 and changed course before barreling toward Turkey’s western coast.

Its change of course toward a land mass prevented it from hitting Turkey as a hurricane, which would have been a first in modern history.

The powerful storm, which formed in the Central Mediterranean, was dubbed “Medicane” as a combination of the words “Mediterranean” and “hurricane.”

“The system has slowed down but it will continue to move north on the Aegean Sea until tonight,” the statement added.

Yesterday, the Meteorological General Directorate predicted that the western provinces of Muğla, Aydın, İzmir, Çanakkale, Edirne and Istanbul would receive rain between 50 to 70 kilograms per square meter as a result of the storm.

The rain is likely to continue until tonight with intervals, according to the directorate.

Winds of up to 70 kilometers per hour are expected to batter the northern Aegean and western Marmara until tonight, the agency said.

Initially, winds of up to 100 kph were expected in the northern Aegean region and that Turkish provinces would receive as much as 75 kg of rain per square meter.

Several sports events scheduled for the weekend were canceled in İzmir and boats were banned from leaving the harbors of popular resorts including Kuşadası and İzmir.

The storm is expected to end today.

The storm brought torrential rain to the southwestern tip of Greece’s Peloponnese region on Sept. 29 as winds of up to 90 kph (55 miles per hour) were reported in the area.

In Athens, roads were flooded and traffic was disrupted near the city center, as well as in coastal suburbs south of the city, according to the Associated Press.

The fire service said it fielded over a hundred calls for flooded homes and to remove fallen trees.

Earlier on Sept. 29, winds of up to 90 kph were reported as the storm moved past the southwestern tip of the Peloponnese. It then hit the northeastern part of the peninsula on its way to Athens.

Police said traffic on the main highway between Athens and the Peloponnese region was closed 54 kilometers west of the capital due to flooding.