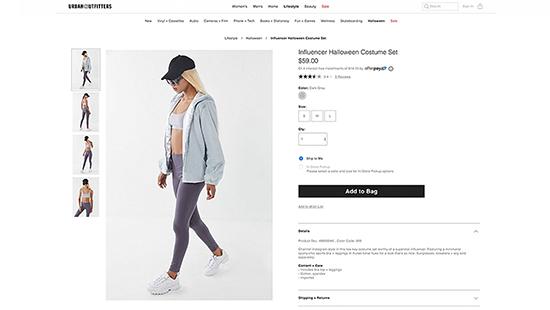 Who says your Halloween costume has to be complicated?

According to Urban Outfitters, wear a simple pair of leggings and a sports bra and you can call yourself an “influencer.”

The retailer has created a Yeezy-syle outfit perfect for any Kim Kardashian fans or those just wishing they had a blue check mark next to their social media handle.

While the costume costs $59, it apparently does not include the sunglasses, blonde wig ($16), black baseball cap ($10) or Fila sneakers ($70) the model is wearing to complete her look.

Response to the costume has been a mix between those who find it hilarious and those who can’t help but mock the absurdity of it.

As of Friday morning, it had a 3.5 star review on the website.

One five-star review reads: “Influencers are the dumbest things I’ve ever seen. Get a real job.”

“This is hilarious. A little pricey, but so funny,” another five-star one reads.

A one-star review reads: “The dumbest thing I’ve ever seen.”

People on social media were also commenting on the costume.

If you’re looking for a more budget-friendly Halloween costume this year, you could also just raid your closet for some gym clothes, instead.

Michelle Gant is a writer and editor for Fox News Lifestyle.