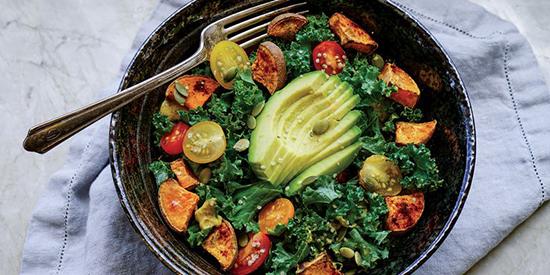 Your salad is not as innocent as it looks.

By Alexandria Gomez and Marissa Miller

Sometimes stomach bloat can be easily traced back to that huge-ass brunch you had with your BFFs. But other times, it’s a complete mystery.

“One person’s poison is another person’s medicine. What one person’s gut tolerates can vary to the next,” says Kelly Schmidt, R.D.

In fact, bloating can happen even if you’re all about the salads and healthy snacks. So it’s important to know that you shouldn’t avoid super-healthy foods just because they make you bloated.

The key is to eat these foods strategically, says Cynthia Sass, R.D. and author of Slim Down Now: Shed Pounds and Inches with Real Food, Real Fast. “Avoid potential bloaters before you know you’re going to be giving a presentation, or when you’d like to wear a form-fitting outfit,” she says.

But if you’re at home in your stretchy pants, there’s no reason not to bust out the popcorn if you feel like it. (Especially since bloating generally resolves itself by morning.)

Curious what your culprits may be? These are some of the most common foods that can cause bloating.

The main reason why something so small can cause major bloating? Two words: sugar alcohols, says Ashvini Mashru, R.D., author of Small Steps to Slim.

“Sugar alcohols, which are a form of carbohydrate that are not very well digested, are a common cause of upset stomach,” she says. The sugar alcohol meets bacteria in the intestinal tract that ferments it, releasing gas—which can lead to bloating, cramps, pain, and/or diarrhea.

Some of the most common names for sugar alcohols are xylitol, mannitol, sorbitol, maltitol, and erythritol, Mashru says, so watch out for them on ingredient lists. If you HAVE to have sugar-free gum, Schmidt suggests trying Spry gum, which only has xylitol (it’s more widely tolerated, she says).

Sorry, La Croix addicts: your fav bevvy might be giving you major bloat.

“I think most people are aware that sugary sodas trigger bloating,” says Sass. But the bubbles that give any sparkling drink its fizz are also a factor. Even without any sweetener, that carbonated gas can inflate your belly like a balloon.

To see if this is the culprit, Sass suggests you try eating the same meal or snack with flat water, then with sparkling, and compare how you feel.

Garlic is an example of a FODMAPsfood, a group of foods that are poorly absorbed from the GI tract into the blood, or not absorbed at all. Because of their poor absorption, they drag water into the intestine and get fermented by bacteria, which builds up gas inside the intestines.

However, that doesn’t mean you need to nix the garlic bread just yet. According to Sass, some people are more sensitive to FODMAPs than others, especially people with IBS. So next time you chow down on something seasoned with garlic, keep an eye on how you feel.

This Olivia Pope-inspired weight-loss snack might have you feeling a little too full. So unfair.

“Popcorn can cause bloating simply because of its volume,” says Sass. “One serving is three to four cups, the size of three to four tennis balls. That large portion only packs about the same amount of carbs as one slice of bread, but it’s going to take up a lot more space in your stomach, which can cause your tummy to look pooch-y temporarily.”

Key word: temporarily. If you’ve got nowhere to be tonight, pop away!

The effect here is two-fold, says Sass. First, there’s the volume; like popcorn, a large salad is going to take up more space in your stomach, and therefore expand it more than a compact meal would—even if your salad has less calories. The other issue is that some vegetables contain those damn FODMAPs, including cabbage, mushrooms, and onions. If you have IBS, eating a big salad can be a double-whammy for bloating, so tread carefully.

Obviously, if you’re lactose intolerant, you know that adding cream or milk to your coffee will leave your stomach on the fritz. But black coffee can trigger some bloating probs of its own, says Sass.

“Because it’s acidic, if you have a sensitive stomach, coffee can be an irritant and cause immediate swelling,” she says. “If you add sugar or an artificial sweetener, the effect can be even worse.”

If you have to have your coffee, keep the dose small, and keep an eye on how you feel drinking it.

You know the elementary school saying: beans, beans, the magical fruit. Hello, gas and bloat! But Margie Saidel, R.D., culinary, nutrition and sustainability vice president at Chartwells K12, says beans are a fantastic protein source so they might be worth the initial discomfort.

To reduce the bloat-inducing extra starch, Saidel says to gradually increase your serving size, triple rinse canned beans before cooking, and pair your meal with a digestive enzyme like Beano.

Milk, as good as it might be for our bones, can be harder on our bellies than its higher-fat cousins like cream, butter, and ghee. “Dairy is delicious,” says Schmidt. “But many people are intolerant to [its] whey, lactose, and casein, so getting a lactose-free milk may not be enough.” And if you’re allergic to dairy, you could experience bloating as a sign of inflammation in the digestive tract.

If dairy is a no-go for you, Schmidt says almond and coconut milks are great alternatives.

“If someone doesn’t tolerate the proteins, lectins, or pesticides in wheat or in the grains used in beer,” Schmidt says, “then the body will hyper-respond to the foreign substance and cause inflammation in the body and on the immune system,” says Schmidt. So no, you’re not imagining things when you leave the bar swearing your stomach feels like Homer Simpson’s.

You don’t have to swear off alcohol entirely, though. Schmidt says “tequila is a pure liquor and can be benign for bloating paired with lots of ice and fresh lime juice.”