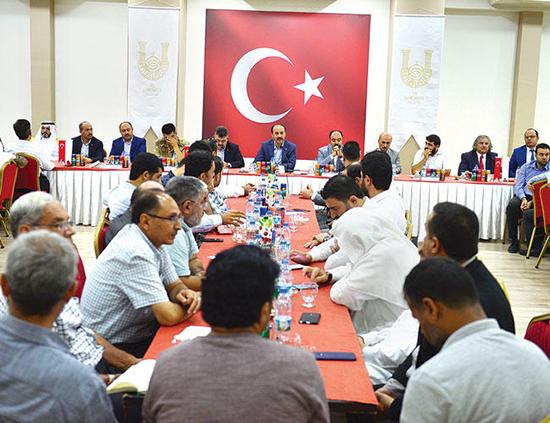 Abdullah Erin, the governor of the southeastern province of Şanlıurfa, on Sept. 30 met with leading figures from the Syrian community in the city to ease tensions triggered by the killings of two locals by Syrians.

A brawl erupted between Turkish and Syrian families on Sept. 27 in the Osmanlı neighborhood of the province, which resulted in Turkish citizens being killed.

Syrians in the city were attacked following the killings.

“The state will not allow and tolerate any unlawful actions,” Erin told the meeting, adding that Şanlıurfa is a city of “tolerance and peace.”

He also said all measures have been taken to prevent any provocation.

According to the governor, 20 people, including Syrians, have been detained over their social media postings that authorities deem as inciting hatred.

He said Syrians living in the city should show respect to their “hosts.”

“In certain neighborhoods Syrians have become a majority. Unfortunately, some attitudes and behaviors of Syrians annoy the locals, such as loitering on the streets until late hours at night,” the governor said, calling on Syrians to show respect to the locals’ way of life.

Syrian community leaders convened condolences over the death of the two people.

They noted it was not easy to reach out to every Syrian living in the city but promised to do their parts.