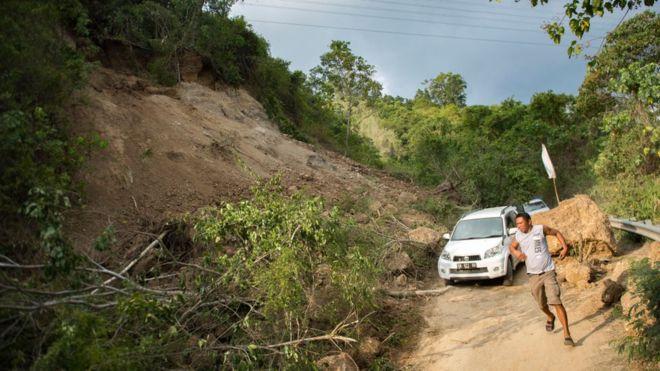 The bodies of 34 Indonesian students have been found under a church which was buried by a mudslide after the quake in Palu, say aid workers.

At least 844 people are confirmed to have died in the disaster, but the number is expected to rise as remote areas are reached.

The aid and rescue operation is being slowed by damaged infrastructure and continuing strong aftershocks.

There are fears some survivors may still be trapped under the rubble.

The students are part of a larger group of 86 students who had initially been reported missing from a Bible camp in the Jonooge Church Training Centre in Sigi Biromaru.

The whereabouts of the other 52 students are not known.

The 34 bodies were found in Sigi Biromaru, just outside Palu, which was struck by a 7.5 magnitude earthquake and a tsunami on Friday.

Aid workers told the BBC they were still in the process of retrieving the bodies, and were being hampered by mud.

“The mud conditions in that area are terrible, we have to walk about 1.5 hours to reach [the mudslide area], that makes it very difficult,” Ridwan Sobri, a spokesperson for the Indonesian Red Cross told the BBC.

Mr Sobri said the identities and ages of the students could not yet be confirmed.

At a collapsed seven-storey hotel in Palu, rescuers are still hunting for survivors.

About 12 people have already been recovered from the ruins of the hotel building – only three came out alive.

“We have to be very careful so we don’t risk hurting any survivors when we move the debris,” the head of the rescue team, Agus Haryono, told Reuters.

An estimated 50 people were thought to be trapped in the Hotel Roa Roa when it collapsed on Friday.

Across Palu, blocked roads, a damaged airport and broken telecommunications have made it difficult to bring help into the affected area, and impossible to contact more remote regions.

With hospitals damaged, injured people have been treated in the open and at least one military field hospital has been set up.

The military has taken over the airport to fly aid in, and injured people and other evacuees out.

But for thousands of people wanting to get the first commercial flight out of Palu, the wait continues.

Those who are stuck are struggling to get hold of food and clean water – which is in short supply. Some have taken to raiding damaged shops for essential products.

“We don’t have any other choice, we must get food,” one man told AFP.

And for hundreds of thousands of children in Sulawesi, their lives will never be the same again.

“Many of these children will have experienced unimaginable trauma and distress, seeing things no child should ever to have to see – losing their mother or father, and watching everything they have known washed away,” said charity organisation Save the Children’s Program Implementation Director Tom Howells in a statement.

Many children have been forced to sleep in makeshift shelters or on the street, with little access to food, medication or emotional support, added Mr Howells.

Across the city, mass graves are being dug, one of them to hold up to 300 bodies.

On the outskirts of Palu, bodies were brought for burial by lorries. At one mass grave which measured more than 50 metres (165ft), the smell of decomposition was said to be “overpowering”.

The earthquake was powerful but shallow and with more lateral than vertical movement, not typically the kind of tremor that sets off tsunamis.

Vice-President Jusuf Kalla has said the final death toll could be in the thousands while the Red Cross estimates that more than 1.6 million people have been affected.