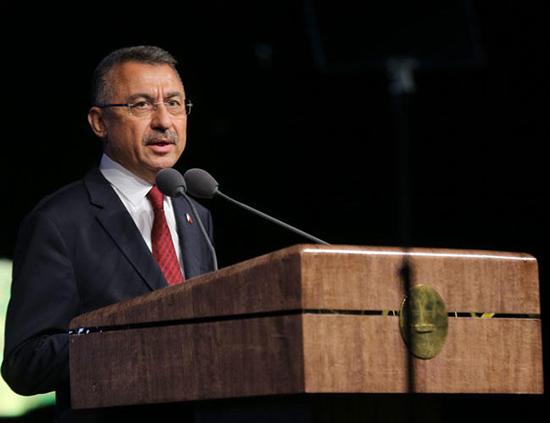 Turkey’s vice president on Oct. 1 slammed countries that recognize the killing of Armenians in 1915.

“We do not respect the decisions of the parliaments that bow before the Armenian diaspora and ban Turkish views,” Fuat Oktay told a gathering of historians in the capital Ankara.

“Despite all efforts, those who aimed to defame our history by using the events of 1915 did not reach their goals,” Oktay said, stressing that efforts “to smear Turkey have failed.”

“The slander campaigns, which intensified particularly before 2015, have been pushed back with our country’s stance and the efforts of our official institutions, such as the Turkish Historical Society,” he told the 18th Turkish History Congress at the Beştepe National Congress and Culture Center.

“We do not need to approach our history with a ‘disclaimer of inheritance’ or take a ‘revisionist’ perspective,” he said.

Turkey’s position on the events of 1915 is that the deaths of Armenians in eastern Anatolia in 1915 occurred after some sided with invading Russians and revolted against Ottoman forces.

Armenians believe up to 1.5 million of their ancestors were killed in what they call the “Armenian Genocide” in 1915 at the hands of the Ottomans.

But Ankara does not accept calling it a “genocide,” acknowledging there were casualties on both sides during World War I.

Turkey objects to the presentation of the incidents as “genocide” but describes the 1915 events as a tragedy for both sides.

Ankara has repeatedly proposed the creation of a joint commission of historians from Turkey and Armenia along with international experts to tackle the issue.