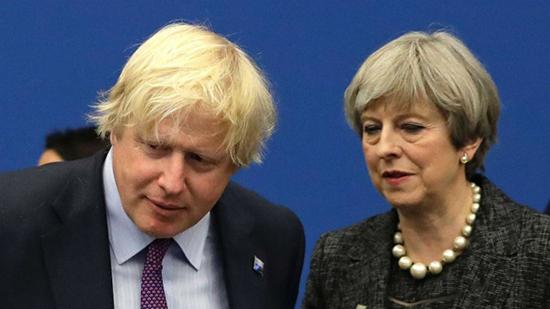 First up was Chancellor Philip Hammond, who in an eviscerating interview with the Daily Mail, declared that Johnson will never be prime minister, mocked the former London mayor’s accent and insisted that he doesn’t have the ability to run a big department, let alone the Government. The former foreign secretary’s only political achievement was London’s “Boris bikes”, Hammond claimed.

Next came Ruth Davidson, leader of the Scottish Tories, who told Sky News that Johnson “appeared to be suffering from amnesia”, in response to a newly published interview that he gave with The Sunday Times. Johnson told the newspaper that May’s Irish backstop pledge was “entirely preposterous” – despite having previously heaped praise on her for it when he was in the Cabinet.

Some commentators claims that the focus on Johnson during the launch of the conference, at Birmingham’s International Conference Centre, has proved useful in drawing attention away from the Tories’ lack of eye-catching new policies. “Since the Brexit referendum, divisions over Europe have wholly consumed the Government”, leaving comparatively little space for traditional doorstep issues, says The Observer.

May’s conference-opening interview with the BBC’s Andrew Marr underlined this problem, says The Spectator’s James Forsyth. The PM’s “broader lack of a positive message about either Brexit or domestic policy will have reinforced Tory concerns that they don’t currently have an adequate response to either Corbyn’s agenda or voters’ concerns”, Forsyth writes.

So what do the Tories have planned for Britain?

In what The Times describes as “an attempt to show that she has ideas beyond Brexit”, the PM has announced that foreign buyers will face a higher stamp duty rate, in an attempt to prevent overseas investment from driving up house prices.

People and businesses who do not pay tax in Britain will face a surcharge of between 1% and 3% when they buy a property, with the proceeds pumped into a scheme to combat homelessness.

Restaurant staff to pocket all their tips

Business Secretary Greg Clark “has finally won a long Whitehall fight” to ban restaurants and pubs from taking a cut of their employees’ tips, says The Sun.

Clark told the newspaper: “It is disgraceful that consumers who are giving tips for great service in good faith aren’t guaranteed that it finds its way to hard-working staff.”

The move “is part of a series of action the Government wants to take to upgrade workers rights and turn around anger with unchecked capitalism”, The Sun explains.

Turn supermarket waste into food for the homeless

Environment Secretary Michael Gove will “announce plans to use food destined to be dumped by the major retailers to provide 250 million meals to those in need”, reports the Daily Mail.

The collaboration, involving supermarkets, charities and the Government, “will prevent food with a retail value of close to £1bn being thrown away”, adds the paper.

Combustible cladding to be banned

Combustible cladding is to be banned for all new schools, hospitals, care homes, student accommodation and residential buildings in England of above 60ft (18 metres).

Housing Secretary James Brokenshire will announce the plan during the conference and “is expected to say he wants to bring about a change in culture on building safety”, according to the BBC.

The move will be welcomed by campaigners, but Politico’s Jack Blanchard says that “the response from most people will surely be – why on Earth wasn’t it banned already?”

May has also given the green light to a nationwide festival of innovation and culture, called The Festival, that will launch in January 2022 – just four months before the next scheduled general election.

Announcing the plan this weekend, she said: “We want to showcase what makes our country great today. We want to capture that spirit for a new generation, celebrate our nation’s diversity and talent, and mark this moment of national renewal with a once-in-a-generation celebration.”

Ministers “are to set aside £120m to plan the event and hire a creative director”, The Times reports.