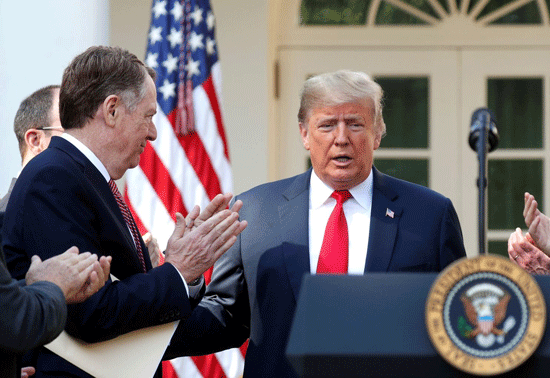 Well, that was unnecessarily painful.

After spending a year and a half alienating our friends, punishing our farmers and manufacturers with devastating tariffs and counter-tariffs, and fracturing the hard-won alliance we had built to isolate and pressure China, we finally got a new trade deal — and a “new” trade strategy.

Yet somehow, they look an awful lot like the old ones.

On Sunday evening, news broke that Canada agreed to the terms of a renegotiated North American Free Trade Agreement. Not merely renegotiated: rebranded! What was once the easily pronounceable “NAFTA” will hereafter be the United States-Mexico-Canada Agreement, or “USMCA.”

Why the name change was needed is a little unclear. Our marketer in chief clearly loves rebranding things, and USMCA, while it doesn’t exactly roll off the tongue, does have the virtue of literally putting America first. Oddly, the posted text of the trade pact itself still repeatedly refers to itself as “NAFTA 2018.” I guess someone forgot to search-and-replace.

As to the substance, well, the best you can say is it could have been a whole lot worse. President Trump didn’t, as he threatened, blow up the system.

So, you know, whoop de doo.

There are some new protectionist measures, such as complicated new requirements for auto rules of origin, which could potentially backfire. That is, they may end up being so costly to adhere to that they’ll encourage manufacturers to move more of their operations and jobs outside of North America.

Other stuff, such as a “sunset” provision requiring members to regularly reaffirm their desire to continue the three-party deal, is probably also not an improvement. There are better ways to encourage ongoing modernization of the deal that would involve less policy uncertainty for businesses. But, again, this section is not as bad as many businesses and trade experts feared.

Trump also won some modest concessions in tiny industries he’s weirdly obsessed with, such as Canadian dairy. He has conveniently played down the concessions he made in exchange: In return for greater American access to the Canadian dairy, poultry and egg markets, we gave Canada greater access to U.S. markets for dairy, peanuts, processed peanut products, sugar and sugar-containing products.

But for the most part, despite Trump’s assertion that “it’s not NAFTA redone, it’s a brand-new deal,” the president mostly kept NAFTA intact.

What’s more, some of the more significant changes — relating to issues such as labor standards, environmental protections and e-commerce — appear to be cribbed from another trade deal that Trump has demonized: the Trans-Pacific Partnership.

If you (like me) supported TPP, this is either reassuring or supremely frustrating.

President Barack Obama negotiated TPP — a 12-party pact that included Canada and Mexico — as part of his own promise to “renegotiate NAFTA.” TPP was also Obama’s strategy for keeping China from writing “the rules of the road” on trade. China was deliberately excluded from the pact, which was designed to cement a coalition of countries that had been wounded by China’s misbehavior. Working together, these trade victims hoped to pressure China to reform.

One of Trump’s first orders of business as president, of course, was to pull out of TPP. He soon thereafter picked unnecessary trade fights with TPP countries we’d previously tried to make common cause with.

Now Trump seems to have realized his mistake. Despite how he characterizes his “historic transaction,” the USMCA is mostly just a smooshing together of two trade deals that he derided as the worst trade deals ever made, as Dartmouth Tuck School of Business professor Emily Blanchard points out.

In fact, a bunch of NAFTA 2.0 language appears squarely aimed at returning to Obama’s alliance strategy for isolating China — which, to reiterate, only requires rebuilding because Trump destroyed it.

For instance, the NAFTA-replacement deal includes “protections against misappropriation of trade secrets, including by state-owned enterprises,” one of China’s major trade sins. Likewise, there’s also language designed to disincentivize NAFTA 2.0 signatories from making free-trade deals with “non-market” countries, widely understood to be targeting China. Some have speculated that Trump may press for similar language in negotiations with other countries, such as Japan.

In other words, Trump has wrought a lot of destruction in service of landing us in roughly the same position we would have been in had we simply stayed in TPP and pursued more amicable negotiations with Mexico and Canada on other outstanding issues.

Some of these harms — such as the steel and aluminum tariffs and retaliatory measures that, despite Sunday’s announcement, remain on the books — may yet be reversible. But the damage to our reputation as a reliable trading partner and ally may be irreparable. To Trump, that may be a feature, not a bug.