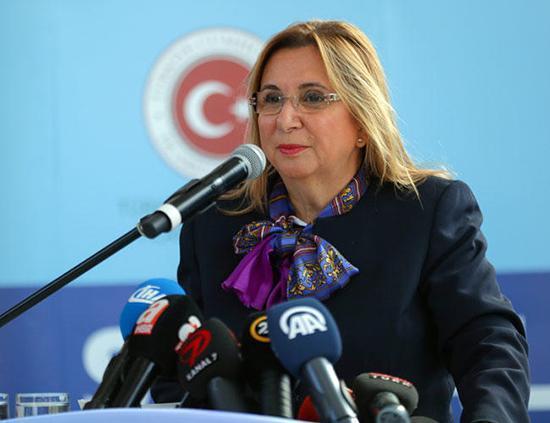 Turkey posted a foreign trade gap of $1.9 billion for the month.

The country’s exports volume surged by 22.6 percent on a yearly basis to reach its highest-ever September export figure, $14.5 billion, Trade Minister Ruhsar Pekcan said at a meeting in the capital Ankara.

She noted that 12-month rolling export volume also reached to a new peak of $165.1 billion.

“Hopefully, we will hit our export volume target for this year, which we upgraded to $170 billion,” Pekcan said.

“Turkey should invest in industries of the future,” she added.

The foreign trade volume dropped to $30.8 billion during the month, falling 3 percent.

The exports-to-imports coverage ratio was 59 percent in the same month last year.

Separate data by Turkish Exporters’ Assembly (TİM) also confirmed on Oct. 1 that exports in September showed the fastest growth in the last 13 months.

“This year we closed every month except June and August with [export] records,” TİM head İsmail Gülle told a press conference in the Mediterranean province of Antalya.

The new figures also said the country’s exports in the first nine  months of this year totaled $123.1 billion, up 7 percent compared to the same period last year.

On a quantity basis, the amount of Turkey’s exports rose 30 percent to 11.2 million tons in September, according to TIM data.

The auto industry remained the leading sector  last month, with  exports worth $2.6 billion in September, up 21.3 percent year-on-year, followed by chemical products with $1.5 billion, and ready-made garments and apparel with $1.4 billion.

Gülle said Germany was the top market for Turkish exports with $1.4 billion, adding that relations with the country will be enhanced.

Turkey’s exports to 176 countries and region saw a year-on-year rise in the month.

Exports to Turkey’s main trading partner, the EU, rose 24.7 percent on a yearly basis to reach $7.3 billion in September, making its share of the country’s total exports 51 percent, the association said.