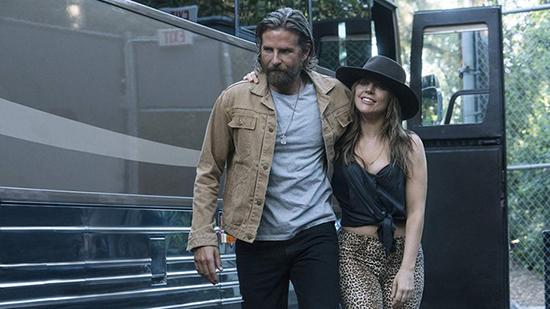 Bradley Cooper directs, writes, and performs alongside Lady Gaga as a rock musician who discovers, and falls in love with, a talented ingenue.

A Star Is Born begins with Jackson Maine (Bradley Cooper), an old-fashioned, gravel-voiced, rock-and-roll star, maniacally jamming out onstage in front of a screaming crowd of thousands. He plays with a trancelike intensity, but when the concert’s over, he becomes a zombie; his ears are still ringing when he commands his driver to take him to the nearest place he can get a drink. He parks himself at a tiny, cramped bar whose own show is about to begin. The scene is bathed in red light by the cinematographer Matthew Libatique, an aesthetic that often evokes the underworld, but here the fiery color suggests something is about to be rekindled.

The show is mostly a drag revue, but there’s one female singer, Ally (Lady Gaga). She belts out “La Vie En Rose,” an intimate performance that’s all but delivered right to Jackson’s face because of how small the room is. It’s essentially love at first sight, and not just for Jackson. Cooper, who wrote and directed the film, has somehow found fresh energy in one of Hollywood’s oldest tales, and that spark is present from the minute Ally and Jackson meet. The opening half of A Star Is Born is an invigorating paean to the joys of making art, the momentum that comes with sudden inspiration, and how swooningly romantic it can all feel.

Cooper’s biggest innovation in this remake, which he wrote with Eric Roth and Will Fetters, is his emphasis on partnership. He interweaves Jackson and Ally’s relationship with the music they create together, so the audience’s investment in both is palpable. Not long after that transformative bar show, Jackson and Ally find themselves drinking in a parking lot, describing their very different lives (she has a crummy catering job and lives with her dad), and figuring out a tune, with Ally coming up with the perfect lyrics to accompany it.

“Can I tell you a secret?” Jackson murmurs in his affected, husky baritone. “I think you might be a songwriter.” He’s right. Ally is a born performer, too, quickly proving that she can handle the bright lights at one of Jackson’s shows. But A Star Is Born follows how the couple’s paths diverge after their meet-cute. Ally soon finds herself on the road to celebrity and fortune, and her journey at first reminds Jackson of the thrill that comes with making something new—a feeling he has long since forgotten.

Eventually things turn sour, as they always do in matters of love and superstardom, at least according to the formula of A Star Is Born. Each edition of the film (whether featuring Janet Gaynor, Judy Garland, or Barbra Streisand) plays like a time-tested ballad, a rise-and-fall arc that demonstrates the double-edged fickleness of fame. As Ally ascends, so must Jackson decline, even as they cling to each other and resolve to record beautiful music together forever. To avoid making the latter half of the movie a simple cautionary tale, Cooper gives Jackson a backstory and pathos, elevating him well beyond a run-of-the-mill drunk.

Fortunately, that character development doesn’t translate into less screen time for Ally. The whole film has a roomy, lived-in feeling, also making time for worthy diversions about Jackson’s much older half-brother, Bobby (Sam Elliott); Jackson’s musician pal, Noodles (Dave Chappelle); and Ally’s dad, Lorenzo (Andrew Dice Clay). These tangents help make everything else—Jackson’s drinking, the central duo’s relationship, and the fissures that eventually open up in their partnership—seem less perfunctory. A Star Is Bornmay be a familiar story, but Cooper wants his film to be an urgent and human one nonetheless.

The fractures between Jackson and Ally, just like their initial connection, center around their music, and the corporate machinery that predictably rumbles to life once Ally finds fame. While previous versions of A Star Is Bornhave leaned on personal tragedy (fueled by the male lead’s substance issues), Cooper reckons with the homogenization that almost inevitably strikes whenever a big new artist emerges. The film also takes the unprecedented step of exploring Ally’s relationship with her own evolving image, a thread that keeps the grimmer parts of the movie afloat.

Still, A Star Is Born is best during its enchanting first hour, when Gaga deftly captures Ally’s sublimated passion for her work. Early on, the actress opts for understatement, while Cooper goes big and broad, playing Jackson as a man consumed by his own reputation as a hard-living rock star. As the movie goes on, the actors swap styles; Gaga’s performance becomes more burnished and remote, and Cooper’s grows hauntingly raw. That reversal is a poignant way to render the power, and burden, of mythmaking, and it allows the film’s final storytelling blow to land that much harder.