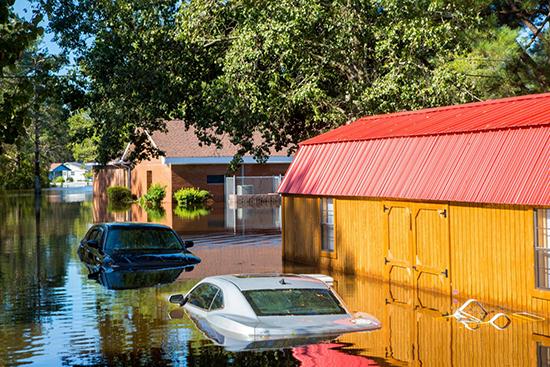 DETROIT (Reuters) – Major automakers on Tuesday posted a hefty drop in U.S. new vehicle sales for September, caused in part by a decline in sales in areas hit by Hurricane Florence and a tough comparison to the previous September when consumers rushed to replace vehicles damaged by Hurricane Harvey.

Fiat Chrysler Automobiles NV (FCA) (FCHA.MI) (FCAU.N) bucked the trend for the month, reporting a 15 percent jump in U.S. sales, led by increases in sales of its lucrative Jeeps – especially its Cherokee and Compass models – and Ram pickup trucks.

The solid performance put FCA’s total sales ahead of longtime No. 2 U.S. automaker Ford Motor Co (F.N) for the month of September.

Hurricane Florence flooded large parts of North Carolina and South Carolina last month, leaving residents to deal with the deluge instead of shopping for new cars.

Sales in September 2017 were boosted by major replacement demand for water-damaged vehicles following Hurricane Harvey, which had flooded parts of southeastern Texas in August that year.

The seasonally adjusted annualized rate of sales (SAAR) for September hit 18.1 million units in September 2017 – the highest sales pace since 2005.

Despite the sales decline versus the same month in 2017, according to Autodata Corp, which tracks industry sales, the SAAR of U.S. car and light truck sales for September came in at 17.44 million vehicles – the highest sales pace since November 2017. This was above the SAAR of 16.9 million units expected by analysts.

After a strong first half of the year, U.S. new auto sales are expected to dip in the second half of 2018, as rising interest rates in particular translate into higher monthly car payments and push more Americans toward buying used vehicles.

“September was a bloodbath for cars,” Cox Automotive analyst Michelle Krebs told reporters on a conference call. “They dropped like a rock.”

Ford Motor Co (F.N) on Tuesday reported an 11.2 percent drop in sales, with declines in every major category. Sales of sedans were down nearly 26 percent.

Ford also posted a decline of nearly 9 percent for sales of its best-selling, and highly profitable, F-Series pickup trucks and a 2.7 percent drop in sales of SUVs.

In a conference call with analysts and reporters, Ford’s U.S. sales chief Mark LaNeve referred to September as a “tale of two hurricanes.”

General Motors Co (GM.N) said its third-quarter sales were down 11.1 percent versus the same period in 2017. Earlier this year, the No. 1 U.S. automaker stopped reporting monthly sales, arguing that a 30-day snapshot did not accurately portray market trends.

Sales were down at all of GM’s major brands, with particularly sharp decreases for passenger cars.

“Our brands are very well-positioned for the fourth quarter when our next wave of new products start shipping in high volume,” Kurt McNeil, GM U.S. vice president for sales, said in a news release.

GM has high hopes for all-new versions of its Chevrolet Silverado and GMC Sierra pickup trucks.

Toyota Motor Corp (7203.T) said its U.S. new-vehicle sales fell 10.4 percent in September. Sedan sales at the Japanese automaker were off nearly 28 percent. That included a 17 percent decline for its flagship Camry midsize sedan, which was completely redesigned with the aim of increasing market share.

Toyota’s SUV and pickup truck sales were down 0.3 percent for the month.

Nissan Motor Co Ltd (7201.T) reported a 12.2 percent drop in sales for September, with a 35.7 percent decline in passenger car sales more than offsetting a 6.6 percent rise in pickup truck and SUV sales.

“It was a tough comparison for sales year-over-year, but otherwise the month was very solid for us with some bright spots,” said Billy Hayes, the automaker’s vice president for regional operations in North America. “We’re still extremely bullish and we’re feeling very good about the rest of the year.”

Honda Motor Co Ltd (7267.T) said sales were off 7 percent in September, as a 19 percent decrease in passenger cars outmatched a 6.3 percent rise in pickup truck and SUV sales.

Monthly sales of the automaker’s completely revamped Accord dropped by 15 percent.

Reporting by Nick Carey and Paul Lienert in Detroit; Editing by Nick Zieminski and Matthew Lewis