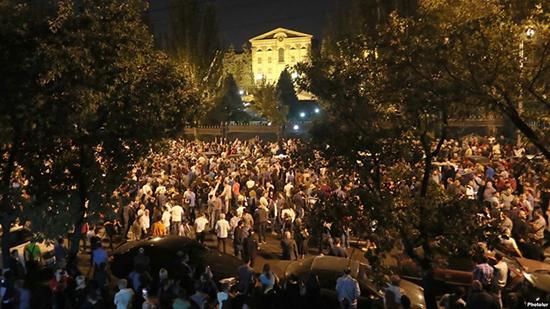 Armenian Prime Minister Nikol Pashinian says he has received assurances from leaders of the parliamentary majority that they will not block early general elections which he wants to be held in December.

Pashinian made his remarks early on October 3 after meeting with legislators overnight as thousands of his supporters rallied outside the parliament building in Yerevan to demand fresh elections.

Under Armenia’s constitution, the National Assembly, where Pashinian controls only a handful of seats, can be dissolved only if the prime minister resigns and lawmakers fail to pick his successor within the next two weeks.

Pashinian said parliamentary leaders of Serzh Sarkisian’s Republican Party (HHK), Gagik Tsarukian’s Prosperous Armenia (BHK), and the Armenian Revolutionary Federation (Dashnaktsutyun) assured him that they will not field any prime-ministerial candidates should he follow through on his vow to resign to force new elections.

“My impression is that our partners from the HHK, BHK, and Dashnaktsutyun got our message… They said that in this situation nobody is going to nominate a candidate for the post of prime minister,” he told supporters after the two-hour meeting.

Pashinian said the three parties at the same time refused to sign any joint statements to that effect. He warned that they will “declare a war against their own people” if they renege on their verbal assurances.

None of the opposition parties immediately commented on the meeting with Pashinian.

The prime minister made clear that, in any case, he will tender his resignation, as promised, “in the coming days” to ensure the elections are held “in the first half of December.” He said he might step down even before Armenia hosts a Francophonie summit on October 11-12.

In an apparent reference to French President Emmanuel Macron, Pashinian said he will talk to some leaders of the loose grouping of French-speaking nations to see if such a move would be appropriate.

Pashinian is due to fly to Paris on October 4 to attend the funeral of French-Armenian singer Charles Aznavour, who died on October 1.

The premier made no mention of a controversial bill which led him to organize the demonstration around the parliament building. The bill passed by the parliament on October 2 could make it harder for Pashinian to force the snap elections.

Addressing the crowd before his talks with legislators, Pashinian urged President Armen Sarkissian not to sign the “disgraceful” bill into law and to send it to the Constitutional Court instead.

He also showed his displeasure by sacking six government ministers affiliated with the BHK and Dashnaktsutyun parties, which had supported the bill.