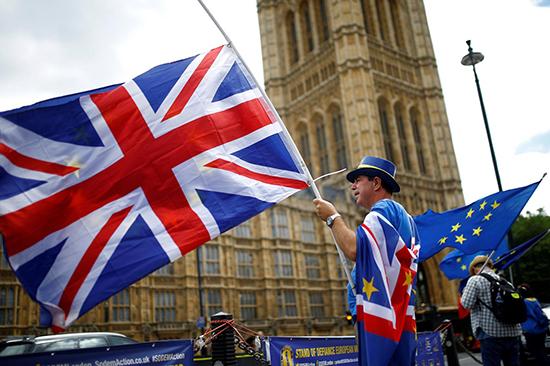 BRUSSELS/BIRMINGHAM, England (Reuters) – “Unworkable”, “unacceptable”, “impasse” – the words used to describe Brexit talks between Britain and the European Union do little to temper concerns that the two are heading for a chaotic divorce.

But behind the scenes, both sides are preparing concessions as part of what one British official called “a constructive dialogue” that could yet lead to a deal.

Officials and sources on both sides say there is a clear will to try to overcome the obstacles to winning a withdrawal deal and agreeing a framework for future ties – a deal on the Northern Ireland border and EU-UK trade.

The EU will start putting in writing its offer for future trade ties, as Britain has pressed for after feeling Prime Minister Theresa May was snubbed at talks in Austria last month.

The official agenda of the bloc’s executive Commission, published on Tuesday, shows it will discuss an “outline of a new partnership with the United Kingdom” on Oct. 10.

Britain has promised to bring a new proposal to unlock a standoff over preventing the return of border checks between the British province of Northern Ireland and EU member Ireland, possibly by compromising about regulatory controls on goods in exchange for Brussels embracing the use of technological fixes for customs checks.

With only six months to go before Britain leaves the bloc, the lack of clarity over the divorce has spooked markets fearful of a no-deal Brexit, which both sides say they are working to avoid.

On Wednesday, May gives a speech to end a fractious annual conference of her Conservative Party, where Brexit rebels have done much to undermine her stance of maintaining close ties with the EU.

On Thursday, Ireland’s Prime Minister Leo Varadkar will be in Brussels for talks with the EU’s Brexit negotiator Michel Barnier.

Senior diplomats in Brussels have been summoned to a Brexit meeting on Friday and Barnier will present an initial draft of the bloc’s trade proposal soon after, which the EU hopes will woo Britain into compromises.

No new dates have been confirmed for the next round of negotiations between Barnier and British Brexit minister Dominic Raab, but several EU diplomats said they expected them to take place in Brussels next week.

“It must be next week or it’s too late to get anything done within our six-week schedule,” one said, referring to a plan to have a preliminary Brexit deal at the next EU leaders’ summit on Oct. 18.

The remaining 27 EU states are due to host a summit on Nov. 17-18 to sign off on any agreement with Britain. Otherwise, they will switch to contingency mode to prepare for a no-deal Brexit in which Britain leaves next March with no agreements in place to mitigate the economic shock.

British officials have signalled new ideas will come. A focus will be attempts to come to agreement over customs arrangements on the island of Ireland to prevent the emergence of a “hard border”, which inflamed sectarian conflict in the past.

Raab said at the Conservative conference he welcomed Barnier’s suggestion that technology could be used to help resolve the issue, after London said it could not accept the bloc’s proposal for Northern Ireland to effectively stay in the EU’s customs union.

He also said Britain was looking at how regulatory checks on some goods could be used as part of a solution to move talks forward.

Northern Ireland’s Democratic Unionist Party, on whose support May relies to govern, swiftly said it would not accept different regulations to the rest of the UK after Brexit.

Brussels dismissed a fix proposed by London in June. EU diplomats stressed they have not yet seen the new British plan.