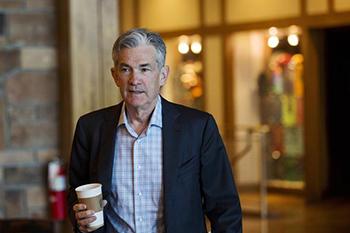 BOSTON (Reuters) – U.S. Federal Reserve Chairman Jerome Powell on Tuesday hailed a “remarkably positive outlook” for the U.S. economy that he feels is on the verge of a “historically rare” era of ultra-low unemployment and tame prices for the foreseeable future.

It is a view, he said, based on how a changed economy is operating today, with businesses and households immunized by strong central bank policy from the inflationary psychology that caused unemployment, inflation and interest rates to swing wildly in the 1960s and 1970s.

It is an outlook that includes an economic performance “unique in modern U.S. data,” with unemployment of below 4 percent expected for at least two more years and inflation remaining modest even as wages rise.

And it is an outlook he feels will even survive the Trump administration’s efforts to rewrite the global trading system, a policy shift Powell said may lead to one-time price hikes, but not to persistent changes in the annual rate of inflation going forward.

“This forecast is not too good to be true,” Powell told the National Associate for Business Economics, but instead “is testament to the fact that we remain in extraordinary times.”

“These developments amount to a better world for households and businesses which no longer experience or even fear the scourge of high and volatile inflation.”

Asked about the impact of tariffs on inflation, he replied that, so far, “we don’t see that in the data.”

Powell spoke as debate among economic analysts and investors has begun turning toward a central question: Will the current low rate of unemployment inevitably doom a near decade-long expansion by driving inflation to levels the Fed will have to suppress with faster and higher than expected rate increases?

That’s not the view contained in the Fed’s most recent round of forecasts, which sees a hot job market, steady economic growth, steady 2 percent inflation and only modest rate increases through 2021 – as if the United States had slipped into the sort of pleasant long-run equilibrium described in textbook economic models.

But several economists here argue that the seeds of trouble have already been planted, with companies using the recent tariff hikes on steel and other goods as an excuse to raise prices more generally, and to perhaps keep doing so.

At a time when Amazon announced a nationwide minimum wage increase that could put pressure on other retailers, the administration was trumpeting a trade pact with Mexico and Canada that will steer auto production to higher wage locales, and leaves in place new tariffs on steel, a key industrial input.

Boston Federal Reserve bank president Eric Rosengren said the current debate over globalization was not so much a “trade war” but “more of a supply chain war” that could take years to sort out as companies shift around production to higher-cost locales to escape tariffs on imports from China.

“Big importers will tell you it is not that easy to change…It becomes a real risk if all of a sudden you are not sure what your price is going to be,” he said on Monday.

The costs of adjusting to tariffs and to trade uncertainty “gives firms cover to say, ‘I’m going to raise my prices,’” she told the NABE annual conference. “I’m timing it for the beginning of the year,” Mann said, when a windfall from this year’s tax cuts fade.

Powell, in his remarks, said the Fed is not blind to the possible “revenge” of prices rising as they have before during times of sustained low unemployment. The central bank is guarding against that with its current, gradual interest rate increases, and will respond “with authority” if an inflationary mindset threatens to take hold.

But he noted that many current and past Fed officials, himself among them, had warned in the years following the 2007 to 2009 financial crisis that falling unemployment and the Fed’s printing of trillions of dollars of new money would unhinge inflation at any moment.

It never happened, and he said there is no reason now to expect it will.

“I am glad to be able to stand here and say that the economy is strong, unemployment is near 50-year lows, and inflation is roughly at our 2 percent objective,” Powell said. “The baseline outlook for forecasters inside and outside the Fed is for more of the same.”