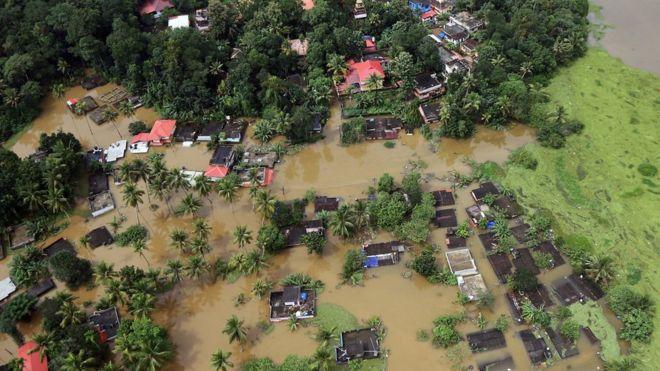 In the wake of devastating floods in the southern Indian state of Kerala, local volunteers played an integral part clearing the mud and debris. BBC Tamil’s Pramila Krishnan spoke to one woman who spent weeks helping clean up her city.

On 23 August, Sandhini Gopakumar, a 34-year-old housewife, returned to her home in the flood-ravaged city of Cochin with her husband and two children. They had been forced to spend five days in three different emergency relief camps.

“On my way back home, I saw the bloated bodies of cattle floating in stagnant water,” recalls Sandhini. “How were we going to clean this up? I thought. How many days would we need?”

The floods were the worst to hit Kerala in a century. Hundreds were killed and more than a million displaced. Like Sandhini and her family, many took shelter in relief camps spread across the state.

By the end of the month, flood waters began to recede and Kerala started to limp back to normal. But even as the danger from flood waters faded, a new challenge loomed large: homes were muddied and wrecked; sewers had overflowed and rubbish filled the streets; large parts of cities and villages had become unliveable.

Sandhini remembers her heart sinking at the sight of garbage piled up in Paravur, her neighbourhood in Cochin. When she entered her house, she found herself knee-deep in mud and surrounded by the unbearable stench of sewage and rotting food.

“It gave me a terrible headache,” she says. It took her two whole days to clean the small two-bedroom house. Nearly everything the family owned, from the furniture to kitchen utensils, was beyond repair.

She says she kept thinking of the thousands of families across Kerala who were also helpless in the face of the destruction wrought by the floods.

“I called up other members from Kudumbashree and we started cleaning public places.”

Kudumbashree is a unique initiative by the Kerala government to fight poverty and empower women. Set up in 1997, it comprises only female volunteers. (“Kudumba” in the local Malayalam language means family and “shree” means woman). Sandhini and her fellow-members volunteered for hours every day to clean up their neighbourhoods and towns.

“My team of 10 might have been small in number but we were strong in our resolve to deliver, and deliver fast,” Sandhini says, with a touch of pride.

Armed with masks and gloves, they got to work. At the local government school, they put the soaked furniture out to dry and rid the classrooms of slush and worms. She says it was disheartening to listen to school officials tell them how many computers had been damaged and how many books and school records had been destroyed.

At the government-run day care centres, they disinfected the floors multiple times because large patches of fungi had spread in many of the centres; and they dug pits for stored food that had begun to decompose.

“Now, every time I pass by, the teacher thanks me for our help,” Sandhini says with a smile.

Over a period of two weeks, they cleared debris, segregated waste and sold wrecked furniture and other items to scrap shops. They swept roads, mopped floors and scrubbed the insides of schools and hospitals.

“I couldn’t afford to donate a lot of money so I gave my time and labour instead,” Sandhini says.

The women exchanged the saris they usually wore in favour of salwar kameez – a popular Indian outfit in which a long tunic is paired with pleated trousers. The trousers allowed them to move more freely, helping them wade through deep puddles and navigate other dangers – like the snakes, scorpions and various kinds of insects the floods had brought into people’s homes.

The health centre, she says, was the worst place to clean. The smell – from the broken septic tanks and the overflowing toilets – was “revolting”.

Some volunteers fell ill, which triggered panic as they feared they had leptospirosis or rat fever. This happens when rats drown in flood water which contaminates it further, allowing the bacteria to spread. The disease claimed 11 lives in Kerala in two days.

“I also had fever for a few days but that was expected – we were tired and needed to rest,” says Sandhini.

Throughout, she had stayed in relief camps or at the homes of friends and relatives, depending on where her cleaning drive took her next.

“We had access to safe food and water because people were generous,” she says.

When she finally went home after two weeks, she says everyone recognised her.

“I was a known face in my neighbourhood. The smile they give me is a symbol of Kudumbashree’s success.”