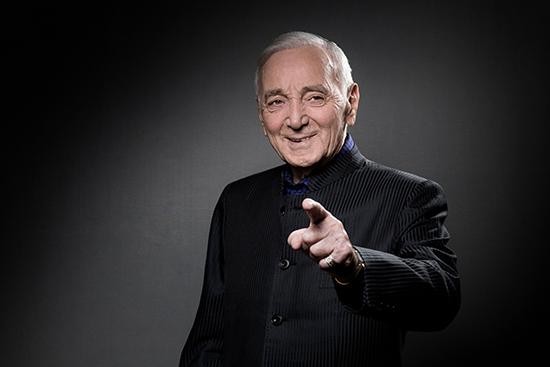 Charles Aznavour, the French singer and songwriter of Armenian origin who died on October 1 at age 94, made a career out of incarnating vulnerable minorities. Aznavour was a fragile, diminutive man with haggard, lined features, even in his thirties. His large, liquid eyes, capable of expressing a range of emotions from rapture to terror, made him the ideal interpreter of tear-jerkers such as “My Yiddishe Momme,” which he sang in French as “La Yiddishe Mama” (2003). He composed and sang “Yerushalaim,” an atypically confident tribute to Israel shortly after the Six Day War. Soon after the kidnapping and murder of the journalist Daniel Pearl by terrorists in Pakistan, Aznavour wrote “One of the Living Dead (Un Mort Vivant),” a grim musical evocation of abusive captivity.

As his memoirs recount, Aznavour was a child of emigrants, born Shahnour Vaghinag Aznavourian in Paris. His parents befriended Jewish working class neighbors as a matter of course and his father spoke fluent Yiddish. National and religious identities were never a barrier for Aznavour or his family. In 2015, he reminded an interviewer that many beloved French popular songs were written by composers not of French origin, such as Guy Béart (1930–2015), born Guy Béhart-Hasson to an Egyptian Jewish family, and Georges Moustaki (1934–2013), of Italian-Greek Jewish origin.

As he matured, Aznavour’s empathy with Jews went beyond a feeling of shared victimhood among minority groups. A tireless activist for international recognition of the Armenian Genocide, when the Ottoman government murdered 1.5 million Armenians, Aznavour’s empathy with minorities was real and seemingly limitless. He wrote a song, “My touching love” (“Mon émouvant amour,” 1982) which incorporated sign language out of solidarity with deaf people. In another, more recent, “From Darkness to Light” (“Des ténèbres à la lumiere”) he portrayed a blind man expressing appreciation for the odors of his beloved. Aznavour even assumed the character of a part-time drag queen in his song Comme ils disent (1972), translated into English as What Makes a Man? Yet in that case, the fraught, tortured tone sounds dated today, compared to piquant, insouciant, and comparatively untraumatized French cabaret songs with gay themes from the 1920s and ‘30s.

Aznavour did not just embody minorities in music, he did so as an actor in many films. In Volker Schlöndorff’s “The Tin Drum” (1979), Aznavour played Sigismund Markus, a Jewish toy vendor in prewar Poland who commits suicide after his shop and local synagogue are vandalized by Nazis. Short, dark, and convincingly Semitic looking, Aznavour was typecast as a Jew in screen comedies including Élie Chouraqui’s “What Makes David Run?” (“Qu’est-ce qui fait courir David?” 1982); Moshé Mizrahi’s “Nailcruncher” (“Mangeclous,” 1988); and Paul Boujenah’s “Yiddish Connection” (1986). In addition to starring in the last-mentioned comedy, Aznavour wrote the screenplay, about Jewish merchants aspiring to be safecrackers.

Perhaps because Aznavour was a singer who acted, or actor who sang, international marketers awkwardly dubbed him the French Frank Sinatra. Although he appreciated the singing of Ol’ Blue Eyes, Azanavour was closer to a French anti-Sinatra. At his peak, Aznavour sang with a heart-tugging, yearning tenor voice, inspiring protective feelings even from cold Parisians. As a performer, Aznavour had little in common with the macho, triumphalist baritone of the Chairman of the Board. His innate lack of vainglory meant that Azanavour never bragged about his family’s heroic rescue of Jews during the German Occupation of Paris, either.

Only last year did he receive the Raoul Wallenberg medal in Jerusalem in honor of his family’s efforts. The Israeli historian Yair Auron had informed Aznavour that he had interviewed relatives of those saved by his parents as part of ongoing research on genocide. Of these people saved, Aznavour recalled to Le Parisien in January, “My father said, ‘These aren’t Jews, they are human beings.’” Auron’s “Righteous Saviors and Fighters” (Matzilim (Tzadikim) Ve’lohamim), including interviews with Aznavour and his sister, Aida Aznavour-Garvarentz, was published last year in Israel, with French and Armenian translations planned.

When asked by another interviewer in 2015 why he had never mentioned his parents’ good deeds, Aznavour replied: “It wasn’t for me to speak about. We are modest in our family.” He went on to mention an Azerbaijani Jew and others sheltered by his parents, while a Jewish gay couple lived downstairs. To please them, Aznavour recalled, his sister would play Hatikva on the piano in the family apartment. At the ceremony in Jerusalem, Aznavour stressed that having survived genocide was not sufficient to bring Jews and Armenians together:

“Jews and the Armenians have so much in common, in misfortune, in joy, in work, in music, in the arts and in the ease of learning different languages…”

Acutely aware of French language and literature, which he celebrated in his songs, Aznavour’s art lost much in translation, although fans worldwide adored his singing in English. In the original French, his wistful, sometimes witty messages alternated with a plaintive, beseeching tone. His ease and mastery when singing in French was lost when he effortfully sang in English. His imprecise diction in live English language performances diluted his impact. The South African Jewish-born lyricist Herbert Kretzmer, who later went on to adapt the songs from the musical “Les Misérables,” translated Aznavour’s song “Hier encore” (1964) as “Yesterday When I was Young.” The result was a major success, but what was charmingly rueful in French became cloying and self-pitying in English. Along these lines, a minor Aznavour opus, “The Good Times” (“Les Bons Moments,” 1967) was covered unexpectedly in the 1990s by Bob Dylan, complete with country-style twang, as “The Times We’ve Known.”

Despite the distortions caused by translation and international fame, Aznavour’s humanity remained. Thirty years ago he recorded a special video message to thank Israel for its assistance in the wake of the 1988 Armenian earthquake, which killed tens of thousands. He was also ever-vigilant about current and forthcoming threats.

In April, Aznavour was one of 300 French celebrities, among them the Jewish authors Elisabeth Badinter and Alain Finkielkraut, to sign a petition warning against the “new anti-Semitism.” The manifesto pointed out that “in [France’s] recent history, eleven Jews have just been murdered – some of them tortured – because they were Jewish, by radicalized Muslims.” At the same time, on a personal and familial level, Aznavour had bright hopes for reconciliation. He enjoyed informing interviewers that he had a Muslim granddaughter and a Jewish grandson, delighting in the encouraging diversity within his own family.