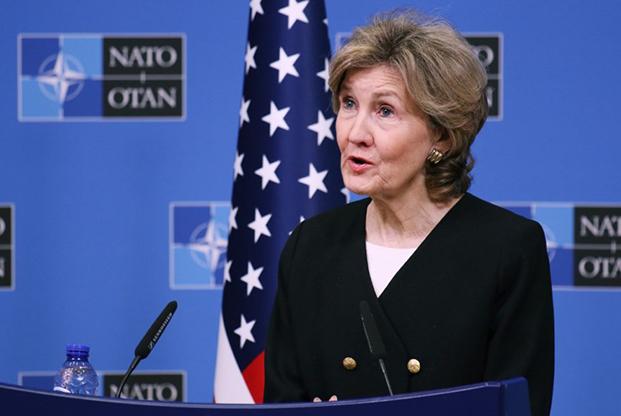 If Russia does not stop working on missiles in violation of the Intermediate-Range Nuclear Forces Treaty, the United States could move to “take out” the missiles, Kay Bailey Hutchison, the Trump administration’s ambassador to NATO, told reporters in Brussels Tuesday, the day before a scheduled NATO defense ministerial.

Later in the day, she appeared to try to walk back the statement in a tweet, saying she was not talking about a preemptive strike.

I was not talking about preemptively striking Russia. My point: ?? needs to return to INF Treaty compliance or we will need to match its capabilities to protect US & NATO interests. The current situation, with ?? in blatant violation, is untenable. https://t.co/dRaFoK8xlo

US officials have raised INF concerns about Russian missiles after Russia reportedly deployed a cruise missile in violation of the 1987 treaty, which bars ground-launched missiles with ranges between 500 and 5,500 kilometers. In February, Defense Secretary Jim Mattis said Washington has “an ongoing issue with Russia’s violation of the INF,” adding, “We do not want to forego the INF, but at the same time, we have options if Russia continues to go down this path.”

Hutchison struck a similar chord Tuesday, saying the US has been “trying to send a message to Russia for several years that we know they are violating the treaty. We have shown Russia the evidence that we have. … They are building a medium-range ballistic missile in violation of the INF. That is a fact which we have proven,” she said.

The US, she said, has consulted with allies on this, “and we will be even more specific, I believe, in the next two days with the evaluations that are documented that we have uncovered from Russia’s actions on the INF Treaty in violation.”

Echoing earlier remarks by Defense Secretary Jim Mattis, Hutchison said the US does not want to pull out of the treaty and does not plan to violate it, so it is asking allies for suggestions on steps that would bring Moscow into compliance. At the same time, though, she said if Russia continues to deny that it is violating the treaty “when the evidence is clear that they are,” then the US will have to find other ways to bring Russia into negotiations.

The US is being careful to stay in compliance with the treaty, she said, but there will come a point when “America will determine that it has to move forward with a development phase that is not allowed by the treaty right now,” she said.

Hutchison said getting Russia to withdraw the missiles, “would be our choice, of course, but I think the question was what would you do if this continues to a point where we know that they are capable of delivering. And at that point we would then be looking at a capability to take out a missile that could hit any of our countries in Europe and hit America in Alaska,” she said, adding that, “We are not moving in that direction right now.”

Her point, she said, was that Russia “needs to return to INF Treaty compliance or we will need to match its capabilities to protect US & NATO interests.” The current situation, with Russia “in blatant violation,” she said, “is untenable.”