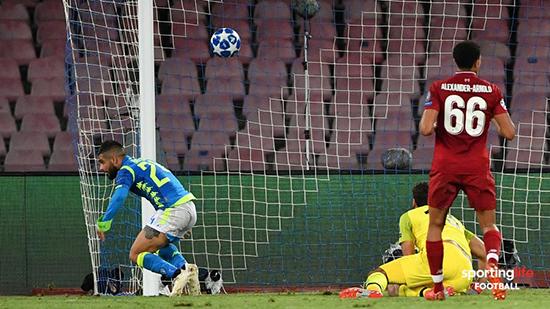 Liverpool received a taste of their own medicine as Napoli scored a 90th-minute winner to inflict a 1-0 defeat on Jurgen Klopp’s side in the Stadio San Paolo.

Two weeks ago the Reds snatched a winner of their own deep into added time to beat Paris St Germain but the tables were turned in Naples with Lorenzo Insigne sliding home from close range 30 seconds from the end of normal time.

In truth the hosts, who also hit the crossbar through substitute Dries Mertens, deserved it having dominated against a Liverpool side putting in one of their worst performances under Klopp.

The last time the Reds came here in 2010 with an understrength side they left with an instantly-forgettable goalless draw.

This performance will also not live long in the memory but had they managed to hold out it would have been an important point.

Napoli became only the second team, after Porto in a dead rubber at Anfield, to stop Liverpool from scoring in the last 19 European matches, but that was only half the problem as Klopp’s side were poor in possession to the point where they were, occasionally, all over the place.

Midfielder Naby Keita made his Champions League debut while Napoli fielded Marek Hamsik, the only survivor from the two sides’ meeting eight years ago in the Europa League.

Liverpool’s team from that encounter is one fans have been trying to forget ever since, coming midway through Roy Hodgson’s ill-fated six-month tenure.

But they played like that much-maligned side, carelessly giving the ball away too many times, especially in midfield with Keita one of the main culprits.

However, he was far from on his own as Napoli seized on every error to establish dominance and had it not been for Liverpool’s excellent centre-back pair of Virgil van Dijk and Joe Gomez things could have been much worse.

Keita’s ridiculous backpass in the direction of Van Dijk was easily cut out and switched to the unmarked Insigne on the left but he drilled a shot just wide of Alisson Becker’s left-hand post.

An injury to Keita, he departed on the medical cart in the 18th minute, may actually have been something of a blessing as his replacement Jordan Henderson at least tried to get a grip of possession in midfield.

It worked briefly although they still needed Van Dijk to do some clearing up at the back when Kalidou Koulibaly broke through down the left – earning a clattering from the Napoli defender, who was booked for sending the Dutchman rolling off the pitch.

The hosts were soon back on it though and Arkadiusz Milik should have done better when he was allowed to turn and shoot around the penalty spot, Alisson parrying before catching the rebound.

Milik’s skidding shot from distance had Alisson scrambling low down to block with Gomez hacking away the danger from the lurking Insigne.

Even the usually unflappable Van Dijk was being affected as he sloppily played the ball into midfield and it came back twice as quickly.

With Gomez trying to cover the space he had vacated it broke to Fabian Ruiz but Trent Alexander-Arnold produced a perfectly-timed tackle to block the shooting opportunity.

Mohamed Salah shot just wide in the 68th minute with his first real sight of goal but it was a rare one for any of Liverpool’s front three.

Substitute Mertens made an immediate impact, having a shot cleared off the line by Gomez and then heading against the crossbar when he should have scored with Alisson getting a slight touch.

The pressure remained on the visitors and they finally cracked when Jose Callejon’s low cross into the six-yard area was diverted home by Insigne.

Speaking after the game, Klopp told BT Sport: “We had our moments, everybody saw that but the formation was not right.

“With the ball we were too hectic. We were really busy but not in the right moments.

“We made a big tactical mistake and they scored. Today they were on their bikes and the atmosphere was there… we let them do it.

“It was an interesting group before we started and it’s still interesting.”