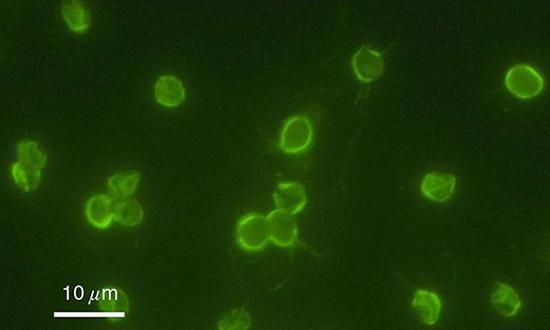 Each year, millions of people worldwide suffer from potentially fatal infectious diseases that often leave survivors facing a lifetime of related health problems. But what if drugs against such diseases already existed but nobody knew it?

Scientists at Calibr, a non-profit drug discoverydivision of Scripps Research, are now exploring that question using an extensive library they’ve built of nearly all existing small-molecule drugs shown to be appropriate for direct use in humans.

The Calibr scientists are using this collection, called ReFRAME, to identify existing drugs that show promise for treating major diseases. As a result of this ReFRAME initiative, two FDA-approved drugs are already being tested in clinical trials—one as a treatment for tuberculosis and another for the parasite Cryptosporidium spp., a major cause of severe diarrhea—within only a few short years of Calibr scientists discovering their utility. This is in contrast to the much longer timelines that often hinder new drug development.

Now, in another early success of the project and demonstration of its power to quickly find much needed novel therapies, the Calibr researchers used ReFRAME to identify two additional compounds that in preliminary testing appeared effective against Cryptosporidium spp. The results of the new Cryptosporidium study were reported this week in Proceedings of the National Academy of Sciences.

“ReFRAME takes the concept of accelerating impact on patients through repurposing existing drugs to a new level, offering great potential for finding much-needed therapies more quickly and cost-effectively,” says Pete Schultz, Ph.D., president and CEO of Scripps Research and Calibr, who is one of the lead researchers on the ReFRAME project. “The drugs we’ve assembled in ReFRAME have already been shown safe in humans, making them an incredibly valuable resource for tackling areas of urgent unmet medical need, especially neglected tropical diseases.”

To construct ReFRAME, Calibr researchers gathered data on more than 12,000 small-molecule drugs by combining three widely-used commercial drug databases (Clarivate Integrity, GVK Excelra GoStar and Citeline Pharmaprojects), which are typically used by pharmaceutical and biotech companies to assess competition and guide drug research and development. Calibr researchers also mined patent filings for drug candidates that had not yet reached these databases but that might hold potential as therapies for diseases outside their original therapeutic indications. With these data in hand, Calibr launched a massive campaign to obtain physical samples of all of the compounds, including purchase of about 7,000 compounds and de novo chemical synthesis of about 5,000 compounds, a project that involved around 500 chemists over an 18-month period. Sufficient quantities were generated to enable hundreds of laboratory tests over the coming years, both at Calibr, Scripps Research, and partner organizations around the globe.

“ReFRAME was developed as a singular new resource for the global health drug discovery community and is the largest and most comprehensive repurposing collection available,” says Arnab Chatterjee, Ph.D., vice president of medicinal chemistry at Calibr and lead researcher on the project. “In addition to consolidating compounds from multiple existing collections, we synthesized around 5,000 molecules that are not commercially available—from which we identified the two new hits against Cryptosporidium.”

Drugs that have been previously tested for safety in humans offer a major advantage over new compounds, as the time and cost of conducting preclinical trials in animals and early trials in humans represents a major hurdle to bringing new drugs to the clinic. Repurposing an existing drug can overcome these barriers, significantly lowering the cost and time required to develop a new way to prevent or treat a disease.

Repurposing drugs, however, is not as simple as it sounds. Prior to ReFRAME, information on existing drugs was spread across multiple databases. Similarly, there was no single, comprehensive source of samples of the actual drug compounds, so collecting thousands of compounds to test against any given disease was a significant logistical challenge. The Calibr team also synthesized close derivatives of many known drugs and included them in the collection, providing an important resource for screening multiple analogues of molecules for therapeutic applications.

“By combining three different commercial data sets and significant patent intelligence, we identified many unique compounds that have never been collected in one place,” says Jeff Janes, Ph.D., a principal investigator at Calibr and coauthor on the paper.

The first two drugs identified for potential repurposing using ReFRAME were the leprosy drug clofazimine and the arthritis drug auranofin. Calibr is collaborating with the University of Washington, who is sponsoring a Phase 2A clinical trial in Malawi, and the Bill and Melinda Gates Foundation to study the safety, tolerability, pharmacokinetics and efficacy of clofazimine in the treatment of cryptosporidiosis in HIV positive patients. Auranofin is currently being tested as a possible treatment for tuberculosis in a clinical trial taking place in South Africa.

In their new study, Calibr scientists used the institute’s high-throughput screening facility to test all 12,000 compounds against Cryptosporidium, a one-celled parasite that travels to the small intestine and bores into the intestine wall causing severe diarrhea.

Current approved treatment options for Cryptosporidium infection are limited to only one drug, nitazoxanide, which has modest potency and is ineffective in patients with compromised immune systems. Repurposing existing drugs was particularly appealing, as little drug discovery research targeting the parasite has taken place due to a lack of commercial interest developing drugs against the pathogen.

In their study, the Calibr scientists placed the parasites in thousands of small chambers and dosed them with samples of the drugs to determine which compounds killed them. Drugs that killed Cryptosporidium in the chambers were then given to mice infected with the parasite, and two drugs, VB-201(CI-201) and ASP-7962, proved effective at treating the infections in the animals. The researchers were able to move from identifying the compounds to animal studies in about two months, a remarkably rapid advance from one phase of drug discovery research to another.

“These two compounds show promise for providing therapeutics for targeting the parasite and not just the symptoms,” says Case McNamara, Ph.D., a principal investigator at Calibr and coauthor on the paper. “If they prove effective at treating this disease in humans, it could impact the lives of millions of people worldwide.”

The Calibr researchers plan to continue adding additional compounds to ReFRAME and are hoping to find drugs in the collection that can be repurposed as therapies to other infectious diseases that are widespread in the developing world. They have also developed an open-access data portal to share the results of their ReFRAME screening experiments with other researchers to encourage additional follow-up and maximize the impact of the screening collection.