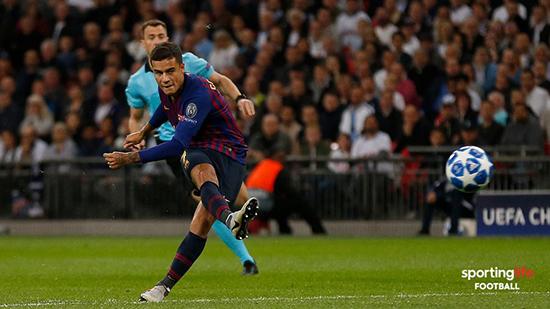 Lionel Messi tormented Tottenham as Barcelona inflicted a Champions League blow on their hosts with a 4-2 victory at Wembley.

Mauricio Pochettino’s Spurs were rocked by stunning goals from Philippe Coutinho, Ivan Rakitic and two from the irrepressible Messi.

Harry Kane, and then Erik Lamela, briefly gave the hosts a chance of taking something from the match by cutting the deficit to one goal.

But Messi’s second in the last minute put paid to that, meaning the late collapse at Inter Milan now looks even more costly for Tottenham who have no points from their opening two matches in Group B.

Yet this was supposed to be a good time to play Barcelona, the Spanish champions having not won in three LaLiga matches, including a shock defeat by bottom club Leganes.

They were certainly vulnerable at the back, but going forward they remain an awesome force as they proved by racing into the lead inside two minutes.

In one fluid movement Messi, on the halfway line, stepped away from Son Heung-min and clipped a superb crossfield pass to Jordi Alba.

Spurs keeper Hugo Lloris did not exactly cover himself in glory upon his return to the side, opting to come charging out of his goal even though Alba was always favourite to get there first.

With Lloris left in a heap on the pitch, Alba squared the ball to Coutinho who took one touch and slotted home from 20 yards.

Spurs fell two behind in the 29th minute courtesy of an outrageous piece of improvisation from Coutinho and a sensational strike from Rakitic.

Collecting Luis Suarez’s chest-down, Coutinho shanked his attempted finish and the ball looked to be spinning out of play.

But the Brazilian managed to retrieve it, flicking it back into play to the edge of the area where it was met with an exquisite leaping volley from Rakitic.

Spurs had memorably beaten Real Madrid in last season’s group stages, but injuries are taking their toll this term and they were missing five players including Dele Alli and Christian Eriksen.

As he glanced at how little in the way of cavalry he had on the bench, Pochettino must have been questioning the wisdom of the club not adding to their squad during the summer transfer window.

After the break Messi was twice denied by a post, gliding through the Tottenham defence each time only to see both shots come back off the foot of the same upright.

Yet from out of nowhere they pulled one back through Kane, who dragged the ball back in the area before curling into the bottom corner.

But within four minutes Messi had found the net, a perfectly executed finish after Coutinho and Suarez both let Alba’s pull-back run across them.

Lamela’s deflected strike halved the arrears with 24 minutes still to play, but Tottenham could not haul themselves level and instead Messi fittingly had the final word.

“These are the games you want to be involved in. You dream of playing in games like this and especially against players like Messi,” the right-back told BT Sport.

“He was unbelievable in the game. We all know the quality of a player that he is and sometimes it’s magic to watch.”

He referenced Messi having been close to scoring two more, and said conceding the early opener had been a major blow to Tottenham’s plans.

“All the boys were looking forward before and to go 1-0 down it’s difficult against a side like this,” Trippier said. “The boys gave everything out there and the second half I thought was much better.”

He defended Lloris, whose dash from his line proved costly for Coutinho’s goal.

“It was his decision to come out and try to go for the ball. We’ll defend him 100 per cent,” Trippier said.

The England international added: “We just keep on going. Barcelona were the better team on the night. We’ve got to take positives out of the game. We’ll recover and reflect on the game and see where we went wrong.”

Pochettino praised his players for making Barcelona fight for their victory after the visitors’ fast start.

“I want to congratulate the team because we were always in the game. It was massive in the second half, we were fighting and never gave up,” he told BT Sport.

“What can you say? What can you do more? I think it’s impossible. I’m so proud. I’m disappointed with the result but the effort was massive.”

He added: “Of course there were a few mistakes, that is clear.”

That was in reference to a question about the costly charge off his line from Lloris, and Pochettino said goals conceded can often be the outcome “when you make a mistake at this level”.

The Tottenham boss said he was “disappointed for that”.

And he also had praise for Messi, his fellow Argentinian, saying: “He’s a fantastic player and not because I tell you but the most important is because Messi in every game shows why he’s Messi.

“His average performance I think is this type of game, that is always above everything.”