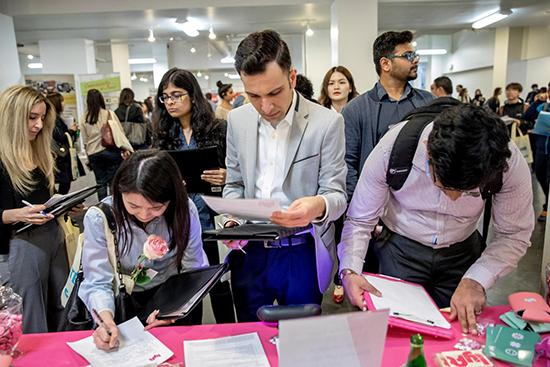 WASHINGTON (Reuters) – U.S. services sector activity raced to a 21-year high in September and companies boosted hiring, signs of enduring strength in the economy at the end of the third quarter.

“The continued strength of the surveys implies that growth is set to remain well above trend,” said Andrew Hunter, a U.S. Economist at Capital Economics in London. “That will keep the Fed raising interest rates steadily in the near term.”

The Institute for Supply Management (ISM) said its non-manufacturing activity index jumped 3.1 points to 61.6 last month, the highest reading since August 1997. A reading above 50 indicates expansion in the sector, which accounts for more than two-thirds of U.S. economic activity.

The ISM’s new orders sub-index for the services sector increased 1.2 points to a reading of 61.6 last month. The survey’s factory employment measure jumped to 62.4 in September from 56.7 in August. This suggests September’s nonfarm payrolls could surprise on the upside when the government publishes its closely watched employment report on Friday.

Companies in the ISM survey were upbeat about business conditions last month, but reported lingering concerns “about capacity, logistics and the uncertainty with global trade.”

Industries are bumping against capacity constraints in a robust economy and tightening labor market conditions.

At the same time, the Trump administration’s “America First” policies, which have left the United States embroiled in a bitter trade war with China and tit-for-tat tariffs with other trade partners, have raised the cost of some raw materials.

According to the ISM, while retailers were bullish about business they said there was “a lot of uncertainty” about the import duties and that this “may cause a shift in production sites.” Wholesalers said the import tariffs were “inflating prices, which are difficult to pass along to the end user due to competitive pressures.”

There were also complaints about labor shortages, especially truck drivers. The ISM’s supplier deliveries index for the services sector increased last month, pointing to bottlenecks in the supply chain.

Companies reported that “suppliers are getting backlogged” and that there were also “capacity and material shortages.” They also reported paying higher prices for materials and services.

“For the time being, firms appear to be looking through heightened risks from tariffs and trade policy uncertainty, belying widespread comments of their concern,” said Jake McRobie, a U.S. economist at Oxford Economics in New York.

“We continue to see evidence of inflationary pressures moving through supply chains.”

The dollar firmed marginally against a basket of currencies and U.S. Treasury yields rose. Stocks on Wall Street were trading higher, with the Dow Jones Industrial Average .DJI at an all-time high.

Separately on Wednesday, the ADP National Employment Report showed private payrolls jumped by 230,000 jobs in September, the largest gain since February, after increasing 168,000 in August.

Last month’s rise beat economists’ expectations for a 185,000 increase. The ADP report, which is jointly developed with Moody’s Analytics, was published ahead of the more comprehensive employment report for September due on Friday.

According to a Reuters survey of economists, nonfarm payrolls likely increased by 185,000 in September after surging 201,000 in August. The unemployment rate is forecast to fall one-tenth of a percentage point to 3.8 percent, an 18-year low first hit in May.

While the ADP report has a poor record predicting the private-payrolls component of the government’s employment report, last month’s jump underscored robust labor market conditions that should underpin consumer spending.

“The labor market continues to boil and is growing hotter,” said Chris Rupkey, chief economist at MUFG in New York. “More workers with money in hand to spend will lead to more consumer spending down the road.”