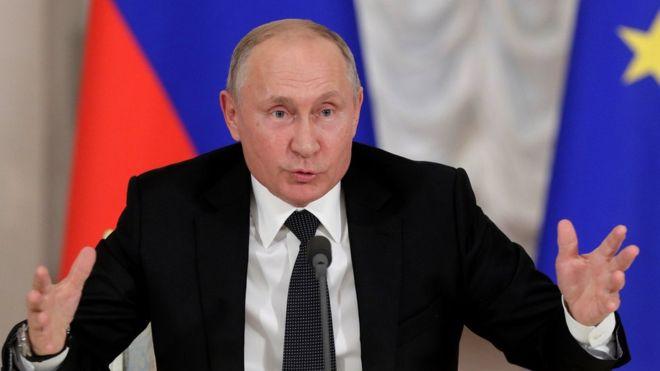 The UK government has accused Russia’s military intelligence service of being behind four high-profile cyber attacks.

The National Cyber Security Centre says targets included firms in Russia and Ukraine; the US Democratic Party; and a small TV network in the UK.

World Anti-Doping Agency computers are also said to have been attacked.

At the time, some of the attacks were linked to Russia – but this is the first time the UK has singled out the GRU, the Russian military intelligence service.

British police think the men who carried out the Salisbury poisoning in March worked for the same group.

The NCSC said it has assessed “with high confidence” that the GRU was “almost certainly responsible” for the cyber attacks.

What is the GRU accused of?

The NCSC says hackers from the GRU, operating under a dozen different names – including Fancy Bear – targeted:

What has the UK government said?

“The GRU’s actions are reckless and indiscriminate: they try to undermine and interfere in elections in other countries; they are even prepared to damage Russian companies and Russian citizens,” said Foreign Secretary Jeremy Hunt.

“This pattern of behaviour demonstrates their desire to operate without regard to international law or established norms and to do so with a feeling of impunity and without consequences.

“Our message is clear: together with our allies, we will expose and respond to the GRU’s attempts to undermine international stability.”

Today’s statement is part of a drive by Britain to keep the pressure on the Russian state and specifically on Russia’s military intelligence outfit – the GRU.

Some of these cyber attacks had been previously attributed by private sector researchers to Russia. Britain had also attributed other cyber-attacks to Russia.

But for the first time British intelligence has singled out the GRU – and not just the Russian state – as specifically responsible for a series of events which hit a wide range of targets.

The statement also collates the range of names that have been publicly linked to the GRU by different security researchers.

Some are well known, like Fancy Bear, and others less well known. The British statement puts them all together in one place and confirms that in the view of British intelligence they all belong to the GRU.

Do other countries carry out cyber attacks?

Russia is not the only state to have been accused of cyber attacks.