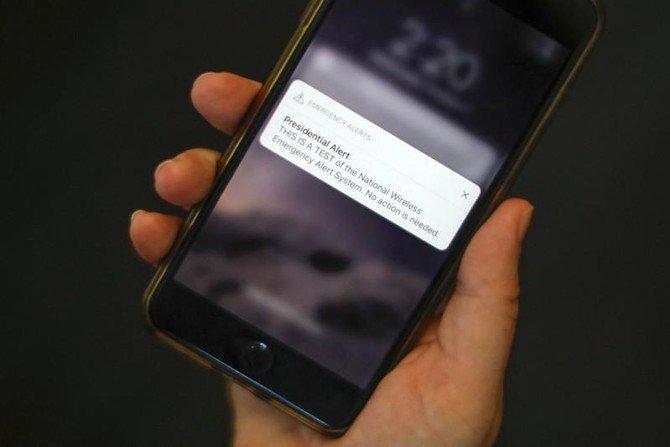 WASHINGTON: Millions of US cell phones buzzed and beeped on Wednesday during the first test of a presidential alert system that would warn the public of a national emergency, such as an imminent attack.
The test message from the Federal Emergency Management Agency (FEMA) went out at 2:18pm EDT (1818 GMT) and triggered a loud tone, a special vibration and a message reading: “THIS IS A TEST of the National Wireless Emergency Alert System. No action is needed.”
A separate alert on television and radios was issued at 2:20pm EDT.
Officials estimated Tuesday that upwards of 225 million US mobile phones and other devices like smartwatches would receive the alerts broadcast by cell towers, or about 75 percent of all devices.
Officials said they expected the alert would not reach all phones for a variety of reasons. Some people reported not getting the alerts or getting them on a delayed basis. US cellphone users are not able opt out of presidential alerts.
The test alert was the most discussed topic on Twitter, in part because of President Donald Trump’s propensity for sending tweets to his 55 million followers.
On a conference call on Tuesday, government officials told reporters Trump would not personally trigger the alert — from his phone or any other device — and emphasized that no president could “wake up one morning and attempt to send a personal message.”
The test alert was sent by a device similar to a laptop from a FEMA laboratory.

The beep of the test alert echoed through Times Square, causing some pedestrians to look up in confusion before turning back to their phones and continuing with their day.
The hashtag #PresidentialAlert became the top US trending topic on Twitter, where most users complained about the alert system or used the opportunity to crack jokes.
Others even made edits to the alert, changing the text in the FEMA-controlled message to “The Clintons are coming!” or “I resign! No action is needed.” The New York Mets sent out an edited version to tout one of their pitchers as baseball’s best.
Some users expressed relief that they did not receive an alert to their mobile device, while some voiced concern that they might not be alerted in the case of a real emergency.
Earlier on Wednesday, a federal judge in New York City rejected a request to block the test in a lawsuit filed last month by three New York residents.