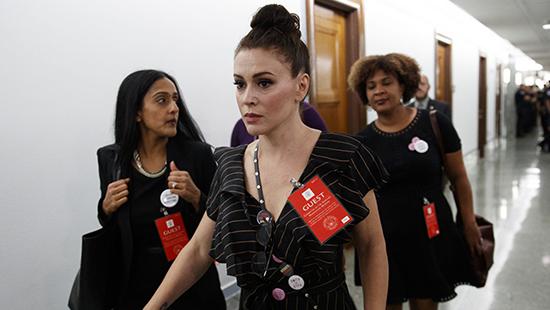 The confirmation process for Supreme Court nominee Brett Kavanaugh seems to have given actress and activist Alyssa Milano some second thoughts about past sexual misconduct allegations against former President Bill Clinton — a man for whom she once expressed “crazy amounts of love.”

In an interview Thursday, Milano was asked whether conservatives had a point in suggesting that Kavanaugh be given the “benefit of the doubt” regarding “ugly allegations,” in a way similar to Clinton, who completed his presidency and has gone forward with a productive career despite accusations about his personal conduct.

On Tuesday, Clinton accuser Juanita Broaddrick asked Milano to “give us an update” on a 2012 tweet, in which Milano expressed her admiration for Bill Clinton, posting in a since-deleted message, “Bill Clinton, I love you so much. Like crazy amounts of love.”

“REAL victims of Bill Clinton would like to hear from you,” Broaddrick wrote to the actress, “or will you continue with your double standard bulls—?”

Broaddrick has demanded an FBI investigation into her 1978 rape claim against Clinton.

In Thursday’s interview Milano also urged the public to look beyond partisanship and said that society’s goal should be a “just world with equality for women.”

“This is not about partisan politics to me, this is about humanity,” the mother of two said. “And we have to, even though this process is so uncomfortable for everyone, we really have to look at it, look at where we want to be, who we want to be as a nation and really examine this in a nonpolitcal way, but just in a human way.”

She concluded by saying that she thought the senators who are on the fence about Kavanaugh’s nomination “care tremendously.”

“My thought to them would be, ‘You have to show us that you care about us by your vote, not just by your uncertainty,'” Milano said.

New York native Milano, 45, known for roles on “Charmed” and “Melrose Place,” as well as appearances in numerous films, has long been outspoken.

Most recently, Milano drew criticism this month from Daily Wire editor Ben Shapiro, after she claimed that the Kavanaugh hearings might be creating “a hard time” for men regarding scrutiny of their personal behavior.

“White men are presumed guilty because they are white men,” Shapiro said, characterizing the actress’ remarks as “the essence of sexisim” during an appearance on Fox News Channel.

Meanwhile, Milano’s remarks about the National Rifle Association irritated Andrew Pollack, father of one of the victim’s of February’s mass shooting in Parkland, Fla.

“@Alyssa_Milano in her speech in Parkland blamed the @NRA for the shooting that killed my daughter,” Pollack tweeted. “She needs to learn her facts before she speaks.”

Marge Champion: Actress who was model for Disney’s Snow White dies at 101