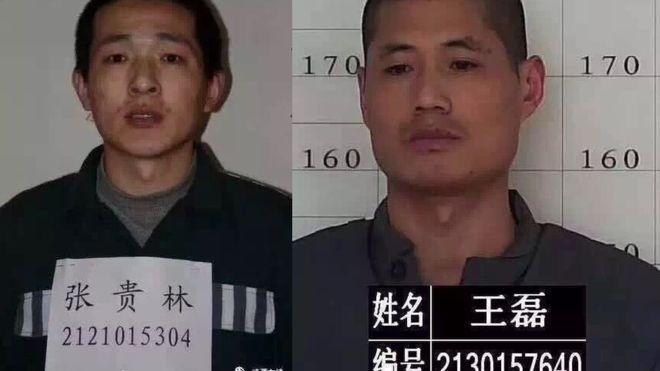 In China, prison escapes are few and far between. So the case of two men escaping from a Liaoning prison has turned into a nationwide hunt.

In an unusual step, Chinese media are appealing for the public’s help in tracking down the escapees and have even publicised a reward for information leading to their capture of 100,000 yuan (£11,185, $14,558).

The pair, who are still believed to be in the province, were serving life sentences in northeastern Liaoning province.

It is very unusual for an inmate to escape from detention in China, and just as unusual for media to report it. Chinese media usually refrain from publicising incidents that might cause public alarm and usually only carry reports once an incident has been resolved or brought under control.

The two prisoners are 33-year-old Wang Lei and 30-year-old Zhang Guilin. They were being held at the Lingyuan Third Prison in northeastern Liaoning province when they escaped.

Little has been reported about Wang Lei, who was sentenced to death for kidnapping in 2017. Reports say his execution was suspended for two years, and that at the end of 2017, it was commuted to a life sentence for good behaviour.

Much more is made of 39-year-old Zhang Guilin, who was serving a life sentence for robbery. He was initially sentenced to seven years imprisonment in 2001, but reoffended in 2008, a year after he was released from prison.

He was sentenced to life in 2009, but The Paper says that he made escape attempts twice during his sentencing. He has been known to be violent, and had intentionally injured another inmate by causing minor facial injuries during a fracas in 2014, The Paper says.

How did they manage to escape?

There are conflicting reports of how exactly the men might have managed to escape.

News site the Beijing Youth Daily earlier reported that the prisoners escaped by wearing uniforms they stole from guards and using their access cards.

However, state broadcaster China National Radio later clarified that the exact details of the men’s escape has not yet been confirmed, adding that the men could have escaped through a window.

Given that both men were serving life sentences, the prison is assumed to be maximum-security. Publicly available information says that the institute specialises in rehabilitation and offers apprenticeships and opportunities for criminals to manufacture clothing.

The incident has stoked strong criticism of the prison authorities on Chinese social media.

Many voice surprise that the suspects haven’t been caught yet, given China’s extensive surveillance and police presence.

This may be a consequence of it being Golden Week – a week-long national holiday in China.

It is common during this time for there to be high levels of movement across the country, and in the congestion it is very easy for people to fall under the radar.

Thousands of users are saying that prison staff are “incompetent” and accuse them of “dereliction of duty”. Some users voice fears about their personal safety given the severity of the convicts’ sentences.

What are media saying?

State media often only report on incidents after they have been brought under control. In cases of “lone ranger attacks”, such as stabbings, the media will only publish a report only after someone has been arrested, or is no longer deemed a threat.

China National Radio stresses that they are not likely to have left the province. Beijing Youth Daily similarly plays down the suggestion that either man might be a threat, saying that both men are poorly educated.

The paper says that Mr Wang is only educated to high school level, and that Mr Zhang is illiterate.

Have there been other prison escapes we know about?

There was a similar incident in September 2014, when three prisoners escaped from a high-security prison in the northeastern city of Harbin.

The men, Gao Yulun, Wang Damin and Li Haiwei, escaped after killing a guard and were able to walk out of prison in stolen uniforms.

Similarly, little information was made publicly available about how they were able to stage their escape without being caught. They were rearrested within a week.