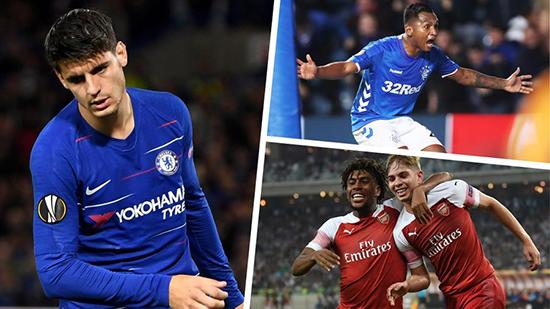 A review of Thursday’s Europa League group stage matches, with Arsenal, Celtic, Chelsea and Rangers all in action.

Qarabag 0-3 Arsenal: Eight wins in a row for the Gunners

Arsenal eased to Europa League victory against Qarabag on Thursday night – but they were far from their best in Baku.

Sokratis Papastathopoulos opened the scoring early on, turning home his first Arsenal goal from close range following Nacho Monreal’s initial header – although he appeared to know little about it.

A first goal also for Matteo Guendouzi secured a 3-0 win which flattered Unai Emery’s side.

Despite a two-goal cushion, Emery felt the need to introduce both Mesut Ozil and Alexandre Lacazette from the bench as the second half wore on.

The game was killed off by Guendouzi’s fine finish 11 minutes from the end, a goal which added gloss to the scoreline and was harsh on a spirited Qarabag outfit.

But it also secured an eighth consecutive win in all competitions for Emery’s men and means they can take control of Group E with victory at Sporting Lisbon later this month.

Salzburg proved simply too good for Celtic as they came back from an early deficit to beat the Hoops 3-1 in their Europa League clash.

French striker Odsonne Edouard gave the visitors a stunning lead in the Red Bull Arena after less than two minutes when he used his strength to fire in from 12 yards.

The Austrian champions, who reached the semi-final of the tournament last season, found Brendan Rodgers’ side resolute in defence until the 55th minute when Israel international Munas Dabbur levelled.

Takumi Minamino put the home side ahead six minutes later before Celtic winger James Forrest was sent off by referee Serhiy Boiko in the 72nd minute for denying Salzburg skipper Andreas Ulmer an obvious goalscoring opportunity.

Dabbur slotted home the resulting penalty to take Salzburg to the top of Group B with six points from two fixtures.

Celtic’s next game is away to German side RB Leipzig on October 25 and, while they will travel with three points from their match day one win over Rosenborg, will surely do so with some trepidation after their second-half display here.

Morata missed a host of chances in the opening Group L win at PAOK in Greece two weeks ago and spurned a glorious opportunity in the first half on Thursday night.

The 25-year-old made amends with 20 minutes to go, but only after Chelsea boss Maurizio Sarri had turned to Eden Hazard in a bid to break a deadlock which stood due to the Blues’ wasteful finishing.

Ross Barkley, another substitute, headed Hazard’s free-kick against the crossbar when Chelsea were 1-0 up, but there were anxious moments before the Blues secured a second win from two games.

Alfredo Morelos’ double ensured Rangers marked the return of group stage action to Ibrox with a 3-1 win over Rapid Vienna.

The old ground was packed to the rafters as Gers hosted their first European group clash since losing a Champions League showdown with Manchester United back in 2010.

And the Light Blues faithful got the result they were longing for as their Colombian hitman struck twice as well as winning the penalty which James Tavernier tucked home to put them on the verge of a deserved win.

Steven Gerrard’s team had fought back to claim an impressive 2-2 draw in their campaign opener with Villarreal and had to battle back again after Veton Berisha had put the Austrians ahead two minutes before half-time.

But having extended their unbeaten run in European contests to 10 under the former Liverpool skipper, Rangers now look in great shape to qualify for the knock-out rounds after moving to the top of Group G with four points.

AC Milan hit back after trailing early to dispatch Olympiakos 3-1 at the San Siro.

Miguel Guerrero grabbed a shock lead for the visitors only for the Italian giants to run amok with a brace by Patrick Cutrone and one from Gonzalo Higuain.

Bayer Leverkusen fought back from a goal down to seal a 4-2 victory over AEK Larnaca at the BayArena.

The German club swatted aside their poor form in the Bundesliga to overhaul Ivan Trickovski’s opener through strikes by Kai Havertz, Lucas Alario (two) and Julian Brandt, with Dimitris Raspas notching a second for the Cypriots.

RB Leipzig posted the first win of their Group B campaign by prevailing 3-1 at Rosenborg courtesy of goals by Jean-Kevin Augustin, Ibrahima Konate and Matheus Cunha.

FC Zurich overcame Ludogorets 1-0 through a late effort from Victor Palsson while Aleksandr Kokorin pounced in similar circumstances to propel Zenit St Petersburg to victory over Slavia Prague by the same scoreline.

Toni Sanabria, Giovani Lo Celso and Cristian Tello propelled Real Betis to a 3-0 victory over Luxembourg minnows Dudelange, while Fredy Montero and Jovane Cabral pounced in injury time to give Sporting Lisbon a 2-1 victory over Vorskla.

Dinamo Zagreb won 2-0 at 10-man Anderlecht and Fenerbahce swatted aside Spartak Trnava 2-0 thanks to an Islam Slimani brace.