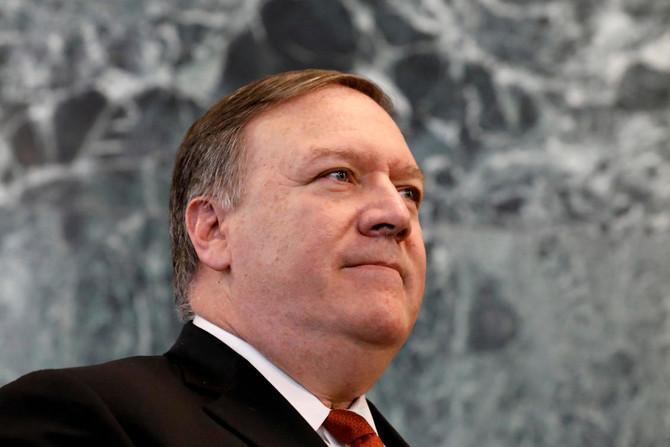 WASHINGTON: US Secretary of State Mike Pompeo heads back this weekend to North Korea as the contours of a potentially historic deal begin to take shape, even if Kim Jong Un’s regime publicly stays firm in demands.
The top US diplomat will pay his fourth visit this year to the onetime US pariah as he looks to arrange another summit between Kim and President Donald Trump, who has declared himself “in love” with the strongman.
Pompeo arrives Saturday in Japan, a treaty-bound US ally which has been privately uneasy about Trump’s rapid reconciliation with the totalitarian state, before he meets Sunday in Pyongyang with Kim.
Just a year after Trump threatened to wipe out North Korea, Pompeo is hopeful that diplomacy can coax Kim to give up the regime’s nuclear weapons and ballistic missile programs.
“This is a long-term problem. This has been outstanding for decades. We’ve made more progress than has been made in an awfully long time,” Pompeo told reporters on Wednesday.
Pompeo has repeatedly declined to be drawn out publicly on the shape of an eventual agreement. The United States has called for a comprehensive accord and rigorous enforcement of sanctions on North Korea in the meantime.

South Korea — whose left-leaning president, Moon Jae-in, helped pave the way for Trump’s diplomacy and who will meet Pompeo in Seoul after he visits Pyongyang — gave a preview of what a deal may look like.
South Korean Foreign Minister Kang Kyung-wha, in an interview with The Washington Post, said that the North could agree to dismantle Yongbyon, its signature nuclear site.
In exchange, the United States would declare a formal end to the 1950-53 Korean War — which closed with an armistice rather than a full-blown peace treaty — but North Korea would stop short of delivering an exhaustive list of its nuclear facilities, she said.
Kang told the newspaper that the tradeoff would mark “a huge step forward in denuclearization.”
North Korea has publicly not budged on its positions. State media ahead of Pompeo’s visit said a peace treaty “can never be a bargaining chip,” saying an end to war “is not just a gift from one man to another.”

Douglas Paal, a former senior US official on Asia policy, said the South Korean proposal could appeal to Trump, who has made clear his eagerness for a second summit soon with Kim.
“The package is something that Trump can announce after he lands in Pyongyang. That’s my projected outcome at this point, although it has not been confirmed,” said Paal, the vice president for studies at the Carnegie Endowment for International Peace.
Trump in June met Kim in Singapore in the first-ever summit between the countries. No sitting US president has visited North Korea, which according to human rights groups remains one of the most repressive countries on Earth.
Paal said Trump likely sensed political opportunity in a breakthrough with North Korea, with congressional elections seen as tough for his Republican Party due on November 6.
When the average US voter “no longer hears the president saying ‘fire and fury’ but hears him saying peace, they believe he has actually made progress toward it, even if arms control people say we’ve made no progress of a material nature at all,” Paal said.
North Korea, ruled by three generations of Kims, has pursued both nuclear weapons and diplomacy with the United States for decades.
It reached an agreement in 1994 to freeze nuclear work in exchange for normalization with the president Bill Clinton’s administration. The deal broke down a decade later, although George W. Bush also pursued talks late in his presidential term.
Pompeo closes his trip Monday in China, which is North Korea’s political and economic lifeline.
The Beijing stop could be tense as it comes days after Vice President Mike Pence delivered a blistering speech accusing China of military aggression, commercial theft, rising human rights violations and electoral intervention against Trump.