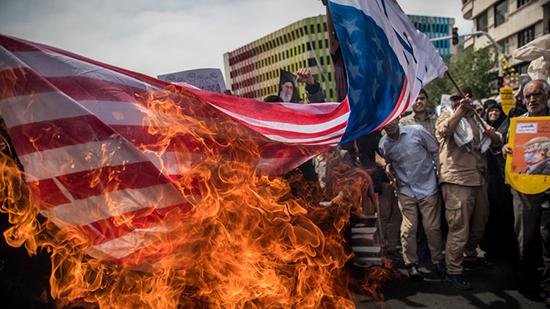 Iran, rarely friendly to Saudi Arabia, has extended an unusual offer of cooperation to its neighbors in the face of “humiliation” by Donald Trump, who claimed the kingdom would fall within two weeks without protection from the US.

While the Islamic Republic and Saudi Arabia have no diplomatic relations, Iran proposed to its arch-nemesis and regional foe to unite against the US to stop the arrogant American stance in the region.

“President Trump repeatedly humiliates the Saudis by saying they can’t last 2 weeks without his support. This is the recompense for the delusion that one’s security can be outsourced,” Foreign Minister Mohammad Javad Zarif tweeted.

While there are no American military bases in Saudi Arabia, one of the closest US allies in the region, with which Donald Trump has signed a $110 billion arms deal, owes its security to Washington, the US president claimed Tuesday, urging Riyadh and the rest of the ‘rich’ countries to cough up cash for American support.

“I love the King, King Salman. But I said ‘King, we’re protecting you, you might not be there for two weeks without us. You have to pay for your military,’” Trump said at a Mississippi rally in undiplomatic remarks, without specifying when the comments to the monarch had been made.

Trump made similar remarks on Thursday in Minnesota, where he told his Republican supporters that the oil-rich nation should pay for their defense. “I said, ‘excuse me, King Salman’, he is my friend, ‘do you mind paying for the military? Do you mind? Pay!’… I said, ‘do you mind paying?’ ‘But nobody has asked me’, I said ‘but I’m asking you, King,’” the president added, claiming that the monarch had agreed to increase contributions.

While only demanding more monetary contributions from Riyadh, Trump embarked on an open hostility path with Tehran, by slapping sanctions on the country after withdrawing from the cornerstone JCPOA nuclear agreement in May. With more punitive measures due to come into effect November 4, the Islamic Republic seems to be eager to muster any support it can get against the belligerent White House administration.

Washington has traditionally supported the Sunni dominant actors in the Gulf and has established a strong military foothold in the region, basing the US Fifth Fleet in Bahrain, a large Air Force contingent in Qatar, in addition to troops that are deployed in Kuwait and Jordan. The only exceptions to the rule are Iraq, where sectarian violence is rife between Shia and Sunnis, and Oman, where the majority of the population belongs to the Ibadi school.

Iran and Saudi Arabia are notorious regional rivals in a decades-long feud fueled by religious differences. Iran, a largely Shia Muslim country, has been challenging Saudi Sunni power across the region by supporting opposing sides in the conflicts in Syria and Yemen. The rivalry also stretches to other parts of the Middle East and their support for different political factions in Iraq and Lebanon.