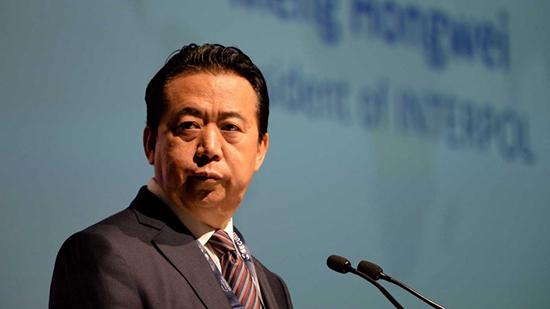 The Chinese president of Interpol, who has been missing since 25 September, is in detention in China and has reportedly resigned from his position with the international law enforcement agency.

Meng Hongwei, 64, had not been heard from since travelling to China from France on business and was reported missing by his wife Grace last week. Her last communication with her husband was a text message saying “Wait for my call”, followed by a knife emoji, which she took to believe that his life was in danger.

“I don’t know what has happened to him,” Grace Meng told reporters in Lyon, France, where Interpol is based. “For as long as I can’t see my husband face to face speaking to me, I can’t be very positive.”

On Sunday evening, Interpol revealed that it had received Meng’s letter of resignation “effective immediately”.

Hours later, Beijing released a terse one-line statement announcing that the 64-year-old was under investigation by a new government anti-corruption unit for suspected “violations of the law”.

The South China Morning Post says the fact that Beijing was “willing to jeopardise its diplomatic relations by snatching a high-profile official in such a way suggested the stakes were high”.

Meng, who is also a senior member of the Communist Party, has more than 40 years’ experience in criminal justice. He was appointed head of Interpol in November 2016.

The BBC reports that Meng is “the latest high-profile disappearance in China, where a number of top government officials, billionaires and even an A-list celebrity have vanished in recent months”.

In July, actress Fan Bingbing disappeared from public view, finally emerging last week with a public apology and a fine of £98.9m for tax evasion and “other offences”.

More students to begin in-class education in Turkey in November