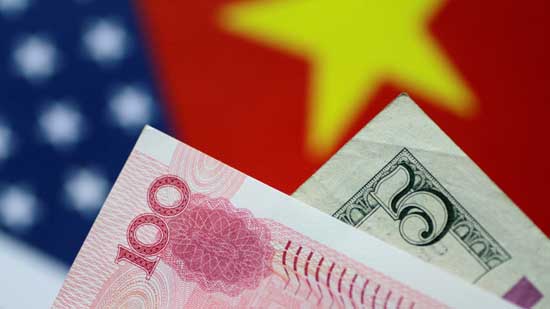 China on Sunday announced a big cut in the amount of cash commercial banks have to put aside at the central bank, a move that will make an extra US$110 billion available for lending as Beijing works to shore up confidence in its economy and markets.

The People’s Bank of China said it would cut the reserve requirement ratio by one percentage point from October 15 as a way to ensure reasonable credit growth and support economic development. As a result, banks will be handed 1.2 trillion yuan, of which 450 billion yuan (US$65 billion) will be used to repay their own borrowings from the central bank and the rest for lending.

While the central bank said the move did not represent a change to its “prudent” monetary policy stance, analysts said it was a signal Beijing was becoming increasingly worried about the domestic economic situation amid the trade war with the United States.

“This is a sign of policy easing to counter [the effects of] the US-China trade war, and shows [Beijing’s] determination to maintain growth,” said Liao Qun, chief economist of China Citic Bank International.

Zhang Ming, a researcher with the Chinese Academy of Social Sciences (CASS), said the move was a response to China’s decelerating growth as a result of the headwinds caused by the trade tensions.

“A deepening trade row with the US will weaken the role of trade in growth,” he said in a note. “If exports slow due to trade disputes, the impact will in turn spread to investment in manufacturing.”

Several economic indicators have shown signs of weakness in China’s US$12 trillion economy.

In September, both the official and unofficial purchasing managers’ indexes for the manufacturing sector fell to their lowest levels since February on the back of a slump in export orders, production and inventory.

In the tourism sector, spending by domestic travellers in the first four days of the National Day holiday, which ended on Sunday, rose just 8.1 per cent from last year, compared with a 21 per cent year-on-year rise 12 months ago, according to figures from the China Tourism Academy.

Coming on the final day of the holiday, the central bank’s announcement may also serve as a shot in the arm for the China’s stock market when trading resumes on Monday morning. While mainland Chinese were on a break, all other major stock markets, from New York to Tokyo, experienced significant dips. In Hong Kong, the Hang Seng Index fell 4.4 per cent last week, its worst performance during a National Day holiday since the financial crisis of 2008.

Xie Yaxuan, chief economist at China Merchants Securities said in a note that the timing of announcement was a deliberate move by Beijing “to offset the shock from declines in global stock and bond markets to the domestic economy”.

China’s onshore stock market has been particularly weak this year. In a speech to the Hudson Institute on Thursday, US Vice-President Mike Pence said China’s stock exchange fell by 25 per cent in the first nine months of the year because Washington “has been standing strong against Beijing’s trade practices”.

The latest central bank announcement comes at a time of rising hostility in China’s external environment, with the US in particular raising the stakes on several fronts, from trade to security.

Against that backdrop, Chinese President Xi Jinping last month told the country to embrace a road of “self-reliance”, after the government had earlier tweaked its economic focus in response to the trade conflict, most notably putting debt reduction – a stated economic priority – temporarily on the back burner.

By reducing banks’ reserve ratio – for the fourth time this year – Beijing is also highlighting the differences between its monetary policy and that of the US. Late last month, the Federal Reserve in Washington raised its key interest rate by a quarter of a percentage point to a 10-year high and is expected to do so again before the end of the year, and several more times in 2019.

Xu Jianwei, senior China economist for French bank Natixis in Hong Kong, said the Chinese government had no option but to take a different path from the US on monetary policy.

“In a trade war, the Chinese economy will face more difficulties with weak investor confidence … China has to inject more liquidity [into the economy],” he said.

Zhang from the CASS said that although Beijing’s monetary easing should in theory lead to more capital outflows and put pressure on the yuan, it went ahead because it wanted to pump cash into the economy and was confident it could control outflows and exchange rates.

China’s foreign exchange reserves fell by more than US$20 billion in September to US$3.097 trillion, after falling by US$8 billion in August, according to the State Administration of Foreign Exchange.

The PBOC relies on draconian capital account controls to manage outbound payments and other administrative measures, including a countercyclical factor that allows Beijing to have a bigger say in setting the value of yuan and prevent any sharp depreciations.

However, as the US continues to raise interest rates expectations of a weaker yuan remain. In Hong Kong last week, the yuan’s offshore rate weakened past 6.9 to the US dollar.

The PBOC said in a statement the reserve ratio cut “would not translate into depreciation pressure on the yuan” and that there were “sufficient conditions” for China to keep the yuan value “basically stable”.

It said also it would continue to take “necessary measures” to stabilise market expectations.