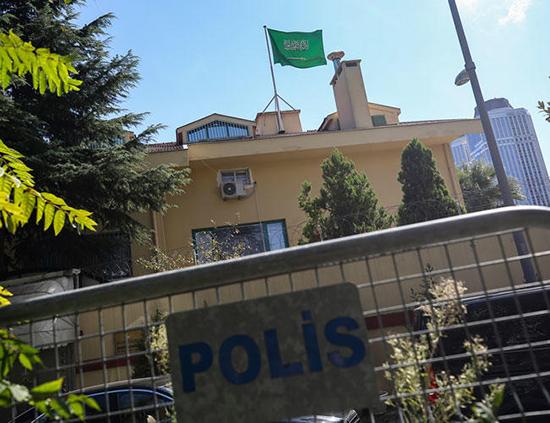 Turkish President Tayyip Erdoğan said on Oct. 7 he was “personally” following the case of Saudi journalist Jamal Khashoggi, who disappeared last week, and added that he still hoped for a positive outcome to the matter.

“God willing, we will not be faced with an undesirable situation,” Erdoğan said, calling Khashoggi “a journalist and a friend.”

“Whatever comes of this, we will be the ones to declare it to the world,” the president said, while answering reporters’ questions in the capital Ankara.

“It is very, very upsetting for us that it happened in our country,” he said.

Erdoğan said CCTV footage of entrances and exits at the consulate and the airport in Istanbul were being studied by the police.

A presidential adviser said on Oct. 7 that Khashoggi had not left the Saudi consulate in Istanbul in “normal ways.” Turkish authorities have concrete information on Khashoggi’s disappearance and the case would not go unsolved, Yasin Aktay told broadcaster CNN Türk.

Meanwhile, the Washington Post reported on the night of Oct. 6 that Turkish investigators believe Khashoggi was killed in “a preplanned murder” at the kingdom’s consulate in Istanbul, citing two anonymous officials.

One Turkish official also told The Associated Press that detectives’ “initial assessment” was that Khashoggi was killed at the consulate, without elaborating. Saudi authorities early Oct. 7 called the allegation “baseless.”

Khashoggi, who has lived in self-imposed exile in the U.S. for the last year, vanished on Oct. 2 while on a visit to the consulate. His disappearance has threatened to upend already-fraught relations between Saudi Arabia and Turkey, and it raises new questions about the kingdom and the actions of its assertive Crown Prince Mohammed bin Salman, whom Khashoggi wrote critically about in his columns. 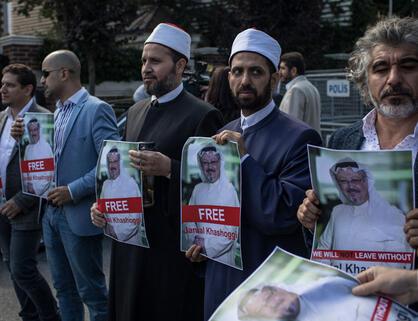 “If the reports of Jamal’s murder are true, it is a monstrous and unfathomable act,” the Post’s editorial page editor Fred Hiatt said in a statement.

“Jamal was—or, as we hope, is—a committed, courageous journalist. He writes out of a sense of love for his country and deep faith in human dignity and freedom.”

The Post cited one anonymous official who said investigators believe a 15-member team “came from Saudi Arabia.” The official added: “It was a preplanned murder.”

“The initial assessment of the Turkish police is that Mr. Khashoggi has been killed at the consulate of Saudi Arabia in Istanbul,” the official said.

“We believe that the murder was premeditated and the body was subsequently moved out of the consulate.”

Khashoggi, 59, went missing while on a visit to the consulate in Istanbul for paperwork to marry his Turkish fiancée. The consulate insists the writer left its premises, contradicting Turkish officials.

“Jamal is not dead! I don’t believe he’s been killed!” his fiancée Hatice wrote on Twitter late Oct. 6 night.

Turkey’s state-run Anadolu Agency said on Oct. 6 that the Istanbul public prosecutor’s office began a probe into Khashoggi’s disappearance on Oct. 2, immediately after he went missing. It added the investigation over allegations that the writer was detained had “deepened,” without elaborating.

The state-run Saudi Press Agency early Oct. 7 morning carried a statement from the Istanbul Consulate that “strongly denounced these baseless allegations, and expressed his doubt that they came from Turkish officials that are informed of the investigation or are authorized to comment on the issue.”

It said Saudi Arabia sent a team of investigators to help look into the case.

Khashoggi is a longtime Saudi journalist, foreign correspondent, editor and columnist whose work has been controversial in the past in the ultraconservative Sunni kingdom. He went into self-imposed exile in the United States following the ascension of Prince Mohammed, now next in line to succeed his father, the 82-year-old King Salman.

As a contributor to the Post, Khashoggi has written extensively about Saudi Arabia, including criticizing its war in Yemen, its recent diplomatic spat with Canada and its arrest of women’s rights activists after the lifting of a ban on women driving. All those issues have been viewed as being pushed by Prince Mohammed, who similarly has led roundups of activists, businessmen and others in the kingdom.

“With young Crown Prince Mohammed bin Salman’s rise to power, he promised an embrace of social and economic reform,” Khashoggi wrote in his first column for the Post. “But all I see now is the recent wave of arrests.”

Khashoggi was known for his interviews and travels with Osama bin Laden between 1987 and 1995, including in Afghanistan, where he wrote about the battle against the Soviet occupation. In the early 1990s, he tried to persuade bin Laden to reconcile with the Saudiroyal family and return home from his base in Sudan, but the al-Qaida leader refused.

Khashoggi maintained ties with Saudi elites, including those in its intelligence apparatus, and launched a satellite news channel, Al-Arab, from Bahrain in 2015 with the backing of Saudibillionaire Prince Alwaleed bin Talal.

The channel was on air for less than 11 hours before it was shut down. Its billionaire backer was detained in the Ritz Carlton roundup overseen by Prince Mohammed in 2017.

The dispute over Khashoggi’s disappearance also threatens to reopen rifts between Ankara and Riyadh.

Turkey has supported Qatar amid a yearlong boycott by Bahrain, Egypt, SaudiArabia and the United Arab Emirates over a political dispute.

U.S. Senator Chris Murphy, the Connecticut Democrat who sits on the Senate’s Committee on Foreign Affairs, expressed shock over the news.

“If this is true—that the Saudis lured a U.S. resident into their consulate and murdered him—it should represent a fundamental break in our relationship with Saudi Arabia,” Murphy wrote on Twitter.

“If Khashoggi was indeed murdered inside a diplomatic facility, it is an act of terror that echoes Russian and Chinese tactics of extraterritorial, extrajudicial attacks on dissidents, intended to intimidate any who would speak out against the Saudi government, no matter where they may be, and giving the lie to official narratives of ‘reform’ in Saudi Arabia,” said Summer Lopez, PEN America’s senior director of free expression programs.

“If Saudi authorities wish to counter these claims, they must produce Khashoggiimmediately. If the killing is confirmed, those responsible for this heinous crime must be held accountable,” she added.