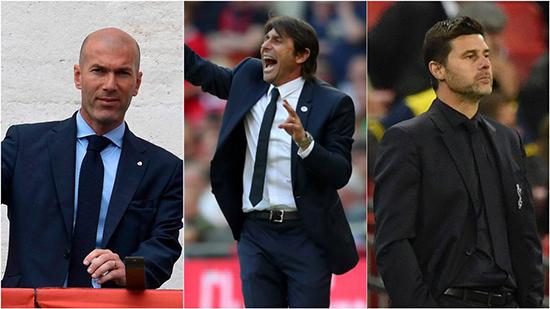 Jose Mourinho’s job may safe for now but with his head seemingly still on the chopping block we look at the main contenders to replace him at Manchester United.

The writing has been on the wall for a few weeks now, so it has finally been confirmed that Jose Mourinho’s spell as Manchester United manager is over.

The Portuguese boss has been relieved of his duties after a poor start to the season, including losses to Brighton, West Ham, Derby (on penalties) and at home to Newcastle.

The search for his replacement starts now for Ed Woodward and the Red Devils board, with the international break providing them with extra time before United’s next fixture (against Chelsea on October 20).

With odds from online bookmaker Sky Bet, we take a look at the top candidates to replace the 55-year-old in the Old Trafford hotseat…

The French footballing legend is a free agent following his surprise departure from Real Madrid, after two-and-a-half years, in the summer.

With three successive Champions League titles and a La Liga triumph on his CV in a relatively short management career, he could be given the chance to impress in the Premier League.

The 46-year-old is odds-on favourite after being sighted in London recently, close to Manchester United’s offices in the capital, while he is also said to be learning English in preparation for the job.

It was also reported how Zidane has been in touch with Mourinho to assure the Portuguese he was not plotting behind his back.

He never worked in England domestically during his playing days and his inexperience in this aspect could cost him when compared with other candidates.

Talking of Premier League experience, another free agent in the running is Antonio Conte, winner of the 2016/17 title with Chelsea.

The Italian – the permanent replacement for Mourinho at the Blues – left Stamford Bridge in the summer after his relationship with the club and his players turned toxic.

With a Premier League and Serie A title, among others, on his CV as a manager, Conte brings a wealth of experience and can get the best out of his players as well as being tactically astute.

Talk recently surfaced linking Conte with the job at Old Trafford, with United chiefs reportedly plotting a double move which would see Beppe Morotta, whom Conte worked with at Juventus, brought in as director of football to work with Conte to try return United to the elite in English football.

Conte’s last Chelsea contract was reportedly worth around £8m a year, so the 49-year-old will not come cheap but a move United are more than capable of financing.

The Argentinian has impressed since first arriving in England as manager with Southampton in 2013.

With a reputation for putting his faith in youth, Pochettino has helped transform Spurs into title contenders and, should United be able to match his demands, he has the potential to succeed with the club.

The question is, would he leave Spurs, in the season they begin a new era in their brand new White Hart Lane Stadium, along with a talented squad which he has developed over a number of years, for a club in disarray both on and off the field?

The 46-year-old is reportedly, along with Zidane, Woodward’s preferred choice to replace Mourinho.

A strange one in the betting for Mourinho’s permanent replacement, but the market terms with Sky Bet state: ‘Caretaker and interim managers completing at least 10 competitive games will be deemed the permanent manager.’

Carrick only hung up his boots at the end of last season and the 37-year-old joined Mourinho’s coaching staff, often seen beside the Portuguese in the dugout, so he is pretty inexperienced on the touchline and training ground.

Carrick could look after the team until a replacement is found and, should United learn their top target is unavailable until the summer, the former England midfielder could end up seeing out the season at the helm.