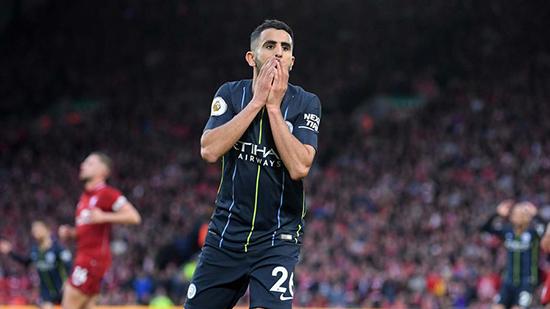 Riyad Mahrez missed a late penalty as Manchester City and Liverpool drew 0-0 in their Premier League showdown at Anfield.

As opposed to the usual free-flowing attacking games that have become the norm between the two teams, Sunday’s game at Anfield was full of pace and quality but low on chances and goal scoring opportunities.

In a tense and tight battle City were presented with a golden opportunity four minutes from time when substitute Leroy Sane was brought down by defender Virgil van Dijk in the penalty area.

Gabriel Jesus wanted to take the spot-kick but Mahrez stepped up and blazed the ball high over the crossbar in what was the biggest, and last, chance of the game.

It resulted in the first goalless draw between these two at Anfield since 1986 – and also City’s first clean sheet at the ground since then – but Reds boss Jurgen Klopp will be celebrating Monday’s third anniversary at the club as the happier manager.

The point allowed City to regain top spot from Chelsea, who had briefly taken over after their win over Southampton earlier in the day, but their opponents dropped to third.

However, the top three are all on 20 points and separated by goal difference only.

It was billed as the biggest game of the season so far but it failed to live up to those expectations as, until the last 15 minutes, both sides appeared reluctant to commit to all-out attack for fear of what the consequences at the other end may be.