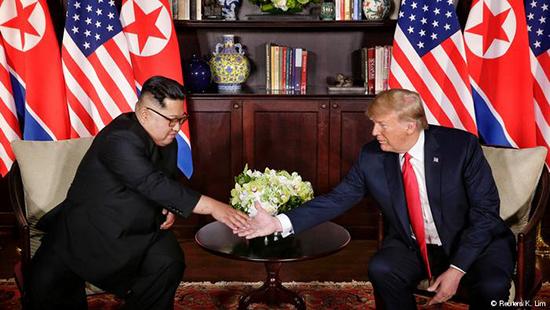 US Secretary of State Mike Pompeo says progress on the North Korean nuclear program has been made during his trip to east Asia. There had been little movement since a historic June meeting between Trump and Kim Jong Un.

South Korea’s presidential office said in a statement on Sunday that North Korean leader Kim Jong Un and US President Donald Trump would hold a second round of talks on the earliest date possible.

US Secretary of State Mike Pompeo was in Seoul Sunday evening after holding “productive” talks with Kim in Pyongyang in the morning.

According to the South Korean statement, Pompeo said “he agreed with Chairman Kim to hold the second US-North Korea summit at the earliest date possible.” There was no mention of a specific time or location.

The US secretary of state and the North Korean leader also discussed “denuclearization steps.” Pompeo said on Monday that Pyongyang had agreed to grant inspectors access to the Punggye-ri nuclear test site, a key demand from Washington for sanctions on North Korea to eventually be dropped.

“Chairman Kim said he’s ready to allow them to come in,” Pompeo said. Earlier, he had tweeted that he had “had a good trip to Pyongyang to meet Chairman Kim. We continue to make progress on agreements made at Singapore summit.”

Pompeo said the US wants to coordinate closely with Japan during denuclearization talks with North Korea.

“We will have a fully coordinated, unified view of how to proceed, which will be what is needed if it is going to be successful in denuclearizing North Korea,” Pompeo told Abe in Tokyo.

The Japanese government wants Washington to safeguard its regional interests in North Korea peace negotiations. North Korea’s abduction of Japanese citizens, for example, is an emotional issue for many in Japan. Scores of people were kidnapped from Japan and used to train North Korea’s spies in Japanese culture and language.

Last month, Abe hinted that he was prepared to meet with North Korean leader Kim Jong Un “to break the shell of mutual distrust.”

But Pompeo faced his real diplomatic test in Pyongyang, which many analysts say is only buying time on its controversial nuclear program.

There has been little progress on the nuclear issue since US President Donald Trump and North Korean leader Kim Jong Un held talks in Singapore in June.

Since the Kim-Trump summit, the North Korean regime has suspended nuclear and ballistic missile tests, freed three American prisoners and dismantled parts of tunnel entrances at a nuclear site. The US says it will not remove sanctions against North Korea until a complete denuclearization of the peninsula.

Speaking to the United Nations General Assembly in New York, Ri Yong Ho said North Korea had taken “significant goodwill measures” in the past year but had not seen “any corresponding response” from the United States.