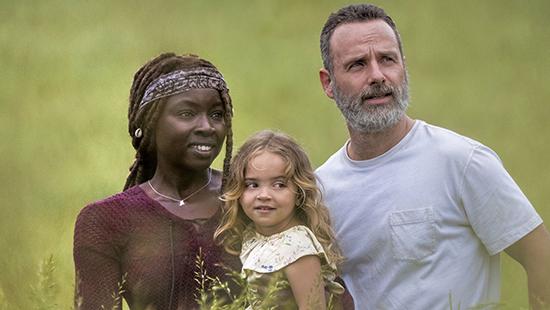 “The Walking Dead” debuted its highly anticipated Season 9 premiere on Sunday and fans far and wide gathered around to see the completely new direction the show is taking.

After ending the war with Negan and the Saviors on a bloody note, fans were told that Season 9 would jump ahead to the future where resources are scarce and our characters are even more tired from the rough world of the zombie apocalypse than they already were.

The premiere episode sees many of our heroes scattered between Alexandria, The Hilltop and the overtaken Sanctuary. Characters fans know to be from the Oceanside colony as well as Jadis from the Scavengers are seen as well. It seems that, following the war, everyone took up some kind of leadership position with Rick Grimes at the helm of everything.

The episode opens with members of each group raiding a museum in Washington D.C. It seems that supplies are not in the same bounty as they were when last fans left the survivors. Now, a hidden stash of seeds and an old-timey wagon plow are worth their weight in gold, which is good news given that it’s incredibly heavy. The survivors try to move it outside across a glass floor only for King Ezekiel to nearly fall to his death. When he’s rescued, it’s revealed he and Carol have finally started dating.

Not only that, he means to propose to her, much to her dismay.

With infrastructure crumbling, Rick and Maggie discuss a vital bridge that needs repairs that connects Alexandria and The Hilltop. Maggie reveals that she’s in charge of the colony, but a lot has changed. For starters, Gregory called for an election to be held after Maggie’s accidental coup removed him from power. She won, but her situation is dire as people look to her to take better care of them than Gregory did, all while he’s whispering negativity about her throughout The Hilltop.

As they speak, one of the members of their crew tries to free a horse only to be caught by surprise by a walker. Although he’s not a main character, he’s the first casualty of the new season.

Meanwhile, Daryl seems to be in charge at the Sanctuary along with Eugene. However, with resources crumbling, the people there are not thriving the way they once were under Negan. While the members there seem excited to see Rick, graffiti on the wall invoking the name of the Saviors and Negan hints at an underground movement forming against him.

Back at The Hilltop, we see just how bad Gregory’s meddling is getting. He visits the family of the boy who died getting the wagon. His parents aren’t thrilled that he died so that the Saviors could have more resources. He convinces the boy’s dad to try and kill Maggie. However, he fails and Gregory’s plot is brought to light, prompting Maggie’s best line of the series:

“You want to lead this place? You can’t even murder someone right!”

It seems Maggie is no longer the caring character she once was. Leadership and a few too many attempts at backstabbing have made her cold. This is proven when Rick arrives to ask if The Hilltop can spare more for the failing Sanctuary. He begs her to stretch her supplies a bit more, but she knows that won’t fly with her people. She makes a deal that if the Saviors will repair the bridge, she’ll feed them for their labor. It’s harsh, but she notes that they surrendered and these are the breaks. No more charity.

Later that night, she calls the town together for Gregory’s hanging. She says that she takes no joy or pride in having to murder someone, but that this is what happens when someone tries to tear their colony apart. However, she gets a metaphorical look at herself when children inadvertently arrive and witness the brutal death.