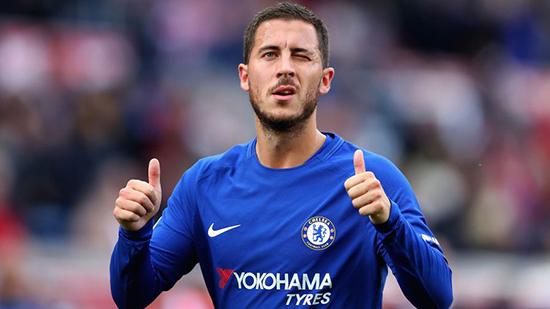 A brutally honest Eden Hazard has admitted that he is torn between signing a new Chelsea contract and making his dream move to Real Madrid.

The in-form Belgium forward, who has two years remaining on his existing Stamford Bridge deal, was heavily linked with a move to the Bernabeu following the World Cup.

Hazard has begun the season in sensational style for the Blues, leading to him being installed as the  favourite to be PFA Player of the Year, but he has now cast fresh doubt over his future.

“I don’t want to say: ‘Yes, I am signing a new contract’ and then in the end I don’t end up signing.

Flying start to the season

Hazard tops the Premier League goal-scoring charts with seven after claiming the opener in the unbeaten Blues’ 3-0 win at Southampton on Sunday, while he’s also been nominated for the Ballon d’Or.

He will turn 28 in January and accepts he probably has one more big transfer before retirement, describing Real as the “best club in the world”.

“That’s why I spoke after the World Cup and I said that I think it is time to change because I played a great World Cup,” he added.

“I am really in the game, I am playing good football at the moment. Real Madrid is the best club in the world. I don’t want to lie today.

“It is my dream since I was a kid. I was dreaming about this club. We will see. I don’t want to talk about this every day. I don’t have time, but we will talk about my future soon. I think so.”

Hazard’s strike and second-half efforts from Ross Barkley and substitute Alvaro Morata at St Mary’s meant Maurizio Sarri’s side ended the weekend joint top of the table, level on points with Manchester City and Liverpool.

Chelsea still behind City and Liverpool

Despite the impressive start, the former Napoli coach believes it may be difficult for his club to maintain their place among the division’s pace-setters.

“At the moment I think exactly what I thought one week ago,” said Sarri. “I think Manchester City and Liverpool now are a step forward of us.

“We need to recover the gap, the gap in the Premier League last season was 30 points between City and Chelsea, so now at the moment we are trying to cover the gap.

“We are working for covering the gap but I think it will be very difficult to cover so large a gap in only one season.”