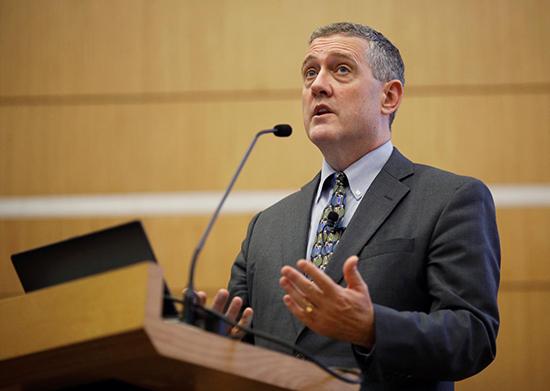 SINGAPORE (Reuters) – Emerging markets were “as prepared as they can be” for changes to U.S. monetary policy as the Federal Reserve had been as “transparent” as possible, St. Louis Federal Reserve Bank President James Bullard said in Singapore on Monday.

Some emerging markets have come under pressure this year as rising U.S. interest rates have drawn investors away, and due to fears of fall out from an escalating tariff war between the United States and China.

The Fed last month raised U.S. interest rates for the third time this year, and foresees another hike in December, three more next year, and one increase in 2020.

Speaking to reporters on the sidelines of an event at the Singapore Management University, Bullard was asked about the prospects for another interest rate increase when the Fed’s rate-setting committee meets in December.

“It will depend on the incoming data. Things are looking good today, I would say. But you never know until you actually get to the meeting,” Bullard, a non-voting member of the committee, said.

Known for his dovish outlook, Bullard said he was comfortable with the current level of rates and argued in favor of being more reactive to data rather than committing to further rate hikes.

Rising U.S. rates, coupled with fears over the impact of U.S.-Sino trade war, have hurt emerging Asia, and currency, bond and share markets in India, Indonesia and the Philippines and elsewhere in the region have all come under pressure.

“There are countries that have problems of varying sorts and they have to sort those out. So in some cases they may get caught off guard,” Bullard said during a question and answer after delivering a lecture on the U.S. economy.

“But I would say, big picture, emerging markets are as prepared as they can be for changes in U.S. monetary policy.”

China, meanwhile, on Sunday, reduced the amount of cash banks must hold as reserves, stepping up moves to lower financing costs and spur growth amid concerns over the economic drag from the trade spat with the United States.

Bullard said U.S. policymakers were keeping an eye on economic developments in emerging markets in case they pose risks for the United States, but for now such risks appeared to be contained.

“We do want to take into account international developments. However, I think that what has happened, let’s say in 2018, has been limited to countries that have special circumstances attached to them,” said Bullard.

“We definitely keep an eye on this and we are definitely concerned if we think it might feed back to the U.S.”

In earlier remarks, Bullard said productivity gains were needed for the United States to maintain its current growth rates, which could be achieved through investments and technology.

The Fed sees the U.S. economy growing at a faster-than-expected 3.1 percent this year and continuing to expand moderately for at least three more years.