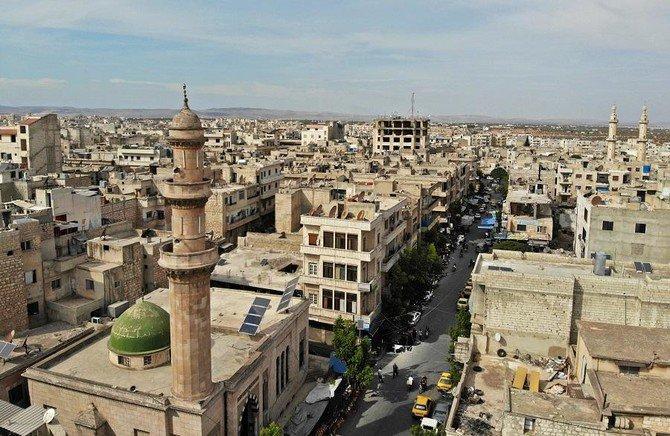 BEIRUT: Extremist factions including Syria’s former Al-Qaeda branch have withdrawn heavy weapons from parts of a planned buffer zone in Idlib province, a monitor said on Monday, two days ahead of a deadline.

Hayat Tahrir Al-Sham “and other less influential jihadist groups have withdrawn their heavy weapons from large areas of the demilitarised zone” ringing Idlib province, said Rami Abdel Rahman of the Syrian Observatory for Human Rights.
The development comes ahead of Wednesday’s cut-off date for all rebels to withdraw heavy arms from a 15 to 20-kilometer demilitarised area ringing the Idlib region.
The creation of a buffer zone is central to an agreement reached last month by regime ally Russia and rebel backer Turkey, which is aimed at staving off a massive assault on Idlib by Syrian President Bashar Al-Assad’s forces.
The deal also foresees radical groups leaving the area by Oct.15.
HTS, which is led by former Al-Qaeda fighters, has yet to comment on its reported withdrawal or announce its stance on the buffer zone deal.
According to the Britain-based Observatory, the pullout quietly began two days ago.
“Until now, heavy weapons have been removed from northern Hama and eastern Idlib” located in the proposed zone, Abdel Rahman said.
The Idlib region includes most of the province of the same name, as well as adjacent parts of the Hama and Aleppo provinces.
In recent weeks, Turkey has deployed troops at “observation posts” it set up in rebel-held areas of Idlib and neighboring Aleppo.
A local source close to HTS said Ankara’s actions demonstrated that neither Turkey, Russia, nor fellow regime ally Iran plan to break the deal.
“The presence of Turkish forces and their posts will prevent any military action,” the source said.
“So (HTS), like other factions, is moving heavy weapons and reinforcing its positions according to the agreement.”
The source confirmed each faction “will remain in its position”, indicating that HTS and the other groups were “ready and prepared” to rebel any attack by the regime.
HTS and other hardliners hold a large part of Idlib province and the proposed demilitarised zone, while the National Liberation Front is the main Turkey-backed rebel alliance in the area.
On Monday, the NLF completed withdrawing heavy arms from the zone, according to Turkish state media.
The start of the NLF pullout was confirmed to AFP by its spokesman Naji Mustafa.
Despite progress in implementing the terms of the deal, Assad on Sunday said the arrangement would not become permanent.
“The agreement is a temporary measure through which the state has realised many achievements on the ground starting with stemming the bloodshed,” he was quoted as saying by state news agency SANA.
“This province and other Syrian territory still under terrorist control will return to the Syrian state,” the president said, referring to both rebels and jihadists.
Forces loyal to Assad have retaken swathes of territory in Syria since Russia entered in the war in September 2015.
Air strikes attributed to Russia have killed more than 18,000 people since its intervention, according to the Observatory.
The Syrian civil war has killed more than 360,000 people since it started in 2011 with the brutal repression of anti-government protests.