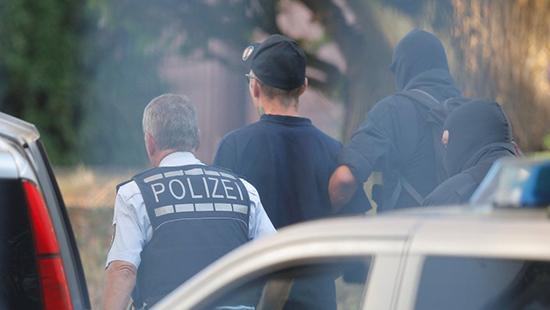 In the wake of far-right unrest in the eastern German city of Chemnitz, investigators have uncovered a suspected neo-Nazi terror cell thought to have been planning a major attack. The arrests show how self-confident extremists have become. By DER SPIEGEL Staff

On October 3, the German national holiday commemorating reunification, it is drizzling in Chemnitz, the wind whistling through the trees. The only thing standing in the music pavilion on Schlossteichinsel, an island in a city park, are a few bottles. The crumbling walls are covered in graffiti, including an Antifa symbol above the words, “the volk must go.”

In nicer weather, young, left-wing Chemnitz residents and refugees meet here. On the national holiday, however, a different group is on hand. A couple of men are hanging out at the dock, steering a remote-control boat through the water. Others in black jackets are drinking beer.

“Not all foreigners should be allowed to come,” says a young man. An older man says he doesn’t believe what has been reported about the island in the press. “All that is controlled from above.”

The Schlossteichinsel is one of the places that is keeping Chemnitz at the center of the German discussion about right-wing extremism. On September 14, right-wing extremists describing themselves as a “home guard” attacked visitors to the island. Apparently, they were practicing for a bigger attack scheduled to take place on October 3.

That assault never happened. Last Monday, just two days before the possible terror attack was to take place, the police arrested eight men suspected of belonging to a terror group called Revolution Chemnitz. If the investigators are right, the cell hoped to surpass the series of murders committed by the National Socialist Underground (NSU), a neo-Nazi terror group that killed 10 people, largely with immigrant backgrounds, between 2000 and 2006.

Chemnitz once again. Camera teams and reporters flocked to the city in late August following far-right unrest. But by the time of the arrests early last week, they had long since left. The affair surrounding Hans-Georg Maassen, the erstwhile head of Germany’s domestic intelligence agency who was accused of pandering to the far right, had drawn the media’s attention back to Berlin. It also served to distract attention from a potentially much more important discussion: Were the events in Chemnitz in late August an indicator of a new form of right-wing extremism?

Last Monday’s raids were a warning. Not only is there an unholy alliance in the Saxon city between the right-wing populist Alternative for Germany (AfD) party, the virulently Islamophobic Pegida movement and right-wing extremists, but the city also apparently gave rise to a neo-Nazi terror cell.

The arrests also highlight how little success the Saxon authorities have had in getting the right-wing extremist threat under control. The raids, after all, were the work of Chief Federal Prosecutor Peter Frank.

Frank has long been worried that a new terror cell might form in the wake of the NSU. That terror group went undetected for years, with the authorities failing to make connections between the murders, which took place across the country. Partially as a result of that failure, attention on the right wing has been greater in recent years. In late 2016, Frank charged four members of the “Gruppe Freital,” or Freital Group, after they had carried out attacks on refugee housing and on leftists. They were given tough sentences by the higher regional court. The same happened to the members of the “Oldschool Society” (OSS), another right-wing terrorist group.

A Trial Run for a Bigger Attack

After the unrest in Chemnitz in late August, federal prosecutors established close contact with the Saxon authorities. On September 21, the chief federal prosecutor took over an investigation into several right-wing extremists because of its “special importance.”

At its heart was the attack on the Schlossteichinsel. About 15 right-wing extremists showed up there that Friday evening at around 9:00 p.m., equipped with weighted-knuckle gloves and a taser. They demanded that a group of young people, who were celebrating a birthday, show their IDs. They then bombarded a different group, made up of Germans, Iranians and Pakistanis with racist insults before attacking them. Three migrants were injured. Five of the right-wing extremists who were later arrested are thought to have been present at the attack.

The chief federal prosecutor initially didn’t classify the men as being part of a terrorist group. That changed when the investigators examined entries in Revolution Chemnitz’s secret chat group.

According to a confidential analysis by the German Federal Criminal Police Office (BKA), the chat suggests the group might have considered the attack on September 14 as a “trial run” for another one that was to take place on October 3. The investigators believe the celebrations for the Day of German Unity in Berlin might have been a potential target. The group potentially intended to “use targeted provocation” to set off a “confrontation between the left-wing scene and deployed police forces,” the BKA wrote.

The men had communicated in an encrypted chat group on the Telegram messenger service. Christian K., the alleged leader of the group, is thought to have set up the group and invited seven others to join.

In their closed chat group, the men escaped into revolutionary fantasies. At around 5 p.m. on September 10, K. wrote — under the name “Keily Hase” — that nothing less than the course of history was at stake. It was a kind of founding proclamation. He wrote that there was a desire to change things, but that doing so “wasn’t always possible without violence.” Each of the men, he wrote, had been part of the right-wing extremist scene long enough and had different “skill sets.” Together, he wrote, they could “move mountains.”

Christian K. piled on shortly before midnight the following evening. The revolution requires victims, he wrote, and “we won’t be among them.” It was quickly determined who their enemies were: “Merkel zombies,” the “media dictatorship and its slaves,” the Antifa and the “black bloc,” a group of militant left-wing activists. K. described the NSU as a “kindergarten nursery-school group.”

But their conversation went beyond slogans. The men discussed how they could get their hands on real firearms, more specifically a Heckler & Koch MP5 and a Walther 9mm. One of the men claimed in the chat that a weapon complete with three magazines could be bought for 800 euros ($920). Another spoke of placing an order anonymously and paying in cash.

In its analysis, the BKA argued that it should be “assumed” that individual members of the group “have the potential” to buy these kinds of weapons. By the time of the raid, however, they hadn’t yet been successful in doing so. During the search, investigators only found truncheons, pepper spray and an air rifle.

After the arrests, the BKA expected possible copycats. That’s presumably why the police enacted strict security measures at this year’s main Day of German Unity celebrations in Berlin. They even deployed snipers and an armored car with a mounted automatic rifle to protect the capital.

Most of the men who were arrested have been members of the neo-Nazi scene for years. They have visited right-wing extremist music festivals like “Rock für Identität” (Rock for Identity) in the eastern German state of Thuringia and participated in protests and torchlight parades. Some of them have made repeated appearances in the files of police and the German domestic intelligence agency. Especially 30-year-old Tom W.

In recent photos, the man with a strawberry-blond beard, a hoodie and baseball cap looks harmless. But the impression is misleading. Already 12 years ago, he led a group that spread fear across the region near Chemnitz. The group called itself Sturm 34 after an SA brigades stationed in the area during the Third Reich. The neo-Nazis’ goal: to make the region “brown and free of vermin” — brown being a reference to the color associated with Nazis — by threatening and attacking “leftists and people with colorful hair.” Members of the group repeatedly carried out brutal attacks during their “skinhead inspection rounds.”

The Federal Prosecutor’s Office at the time looked into whether it could take over the proceedings against Sturm 34. The BKA and the domestic intelligence agency were also concerned about the group, which has since been banned. Ultimately, though, the case remained in the hands of the Saxony justice system — and it took years before they were able to finally sentence the group’s leaders. And Tom W. received only a mild suspended sentence.

The Revolution Chemnitz group has a long history. As early as fall 2013, a Facebook page went live with slogans like “free, social, national” and “the death of the people approaches.” It caught the attention of authorities.

As the number of refugees grew, the neo-Nazis’ online slogans became increasingly radical and they began referring to foreigners as “maggots.” One of the current terror suspects, a soccer hooligan named Sten E., posted a composite photograph of “refugee witch” Angela Merkel being raped by a black man. He himself posed in a T-shirt with the slogan “victory or death.” In the apartment of one of the accused, investigators found a large swastika on the wall.

The unrest in Chemnitz in late August galvanized the group. That unrest broke out following the stabbing death of 35-year-old Cuban-German Daniel H. allegedly at the hands of two asylum seekers. In response, right-wing extremists took to the streets several times in the ensuing days.

“We don’t want any knifers,” one of them posted online. He also commented on a cell-phone video of the right-wing protest with the phrase: “People rise up and let the storm break loose,” a quote from Joseph Goebbels’ “Total War” speech.

Christian K., the suspected leader of the group, wrote in the encrypted chat group that it is time “for action, not just words.”

In the coming weeks, investigators will determine how far along the suspected terror cell’s plans were and whether there is sufficient evidence to press charges. The defense attorneys for the accused have declined comment for now.

But the case of the self-proclaimed Chemnitz revolutionaries shows just how self-confident the far-right scene has become — and how dangerous the fierce debates of the past few weeks have been.

When Saxony Governor Michael Kretschmer, a member of Chancellor Angela Merkel’s center-right Christian Democrats (CDU), visited the city on August 30 to take part in a dialogue event with citizens, he almost had a chance to encounter Christian K. In one photo, K. can be seen wearing a bullet-proof vest and a bud in his ear, just like a member of a special police unit. The neo-Nazi arrived at Kretschmer’s event dressed in a similar outfit. But the police stopped the right-wing extremist and removed his bullet-proof vest. Two weeks later, he was under arrest.