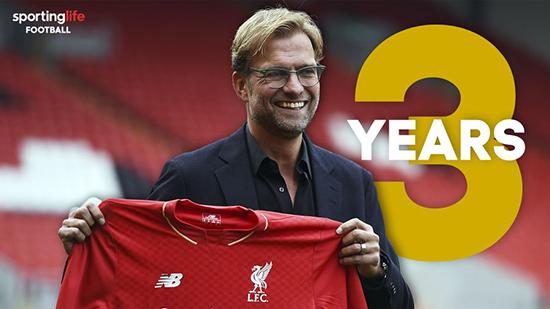 As Jurgen Klopp celebrates his third anniversary of becoming Liverpool manager we look at what has been an eventful spell already at Anfield.

The fact of the matter is that Klopp is yet to put any silverware into the Anfield trophy cabinet, but the almost unanimous verdict is that he’s been a huge success and has managed to deliver Liverpool back to the top table of European football.

Klopp promised heavy metal football when he arrived, and he’s since introduced ‘Gegenpressing’ into the English football dictionary as Liverpool’s full throttle style has seen them become one of the best teams to watch in the Premier League.

The German has had many memorable moments already with some huge games at Anfield, dramatic finishes and three cup finals – one of them the biggest in Europe – but there’s still no doubt they are a work in progress.

And progress is exactly the word, it’s been more evolution than revolution at Anfield in terms of the bare results, but the atmosphere that surrounds the club and the feel-good factor that fills the Liverpool fans at almost every turn has been entirely of Klopp’s making.

He now just needs to add some silverware! Let’s look at his three years in charge so far…

The German took over a team that had nearly won the league just over a year earlier so it was not exactly struggling, but it was clear where the faults were and although it’s been a slow process the squad certainly looks hugely stronger now than when he arrived.

Klopp’s first signing? The answer to that tricky quiz question is Marko Grujic. His second? An even more puzzling Steven Caulker on loan from QPR. From those early forays into the transfer market Klopp has since been splashing world record amounts on keeper Alisson and defender Virgil van Dijk.

Having shown that he’d rather wait for an extra transfer window rather than buy his second choice, Klopp did exactly that for Van Dijk, then waited an entire season to finally get Naby Keita to Merseyside but, so far, those moves are looking wiser and wiser every week.

Ragnar Klavan, Loris Karius and Grujic are the only major duds in Klopp’s transfer policy.

Liverpool’s style under Klopp is maturing

The all-action style has blown teams away, especially at Anfield, time and time again. Klopp received criticism when he arrived for training his players too hard but they’re settling into the model now as their manager demands the highest of tempos.

The ‘high press’ as is spoken of all the time is nothing new at Anfield – Ian Rush was master of ‘defending from the front’ as it was known back then, but it’s something which a lot of teams are now trying to introduce.

It’s more than just headless running around, this season especially has seen a more mature approach with pressing been done at the right time rather than constantly – and Klopp is also refining his side defensively with his new signings offering them a much more solid base.

Striking that balance between defence and attack is key – Liverpool don’t look like scoring as many as last season but they also don’t look like conceding anywhere near as many, and it’s this mix in styles that he will hope leads to success.

Progress has been steady in the league, they’re winning more and more games, losing less and conceding less, but it’ll still take a monumental effort to overhaul Manchester City in the Premier League.

City have, though, been put to the sword a number of times in some of Klopp’s Liverpool highlights – namely a 4-3 Premier League win followed by a 3-0 Champions League victory, both at a rocking Anfield, before finishing the job at the Etihad.

Other superb European nights in front of the Kop saw Borussia Dortmund undone with a dramatic injury time header by Dejav Lovren of all people while Roma were dispatched in a crazy 5-2 victory that helped fire the Reds on to the Champions League final.

Klopp has made Anfield a fortress again – even Pep Guardiola altered his tactics to protect against his Man City side losing again at the venue, and those memorable games have only served to help solidify the relationship between Klopp and the club’s fans.

Taking that next step

Liverpool have lost three finals under Klopp, two of those in Europe, but they do not seem to have affected his standing with the Liverpool fans – but in football of course, things can change quickly.

Klopp is unlikely to be hounded out of Anfield any time soon but after splashing the cash this summer a serious title challenge is the minimum requirement this season – while a trophy would be ideal.

It’s a difficult balancing act as Liverpool do still not have the squad strength of Manchester City and the Champions League in particular can be a big distraction, but the Reds have rarely had a better chance and Klopp has laid solid foundations to launch title bids for the next few years given the age of his squad.